Lobbyists must register with the Secretary of the Senate and the Clerk of the House when they take on new clients, and file reports disclosing their lobbying activities, income, and certain political contributions.

In our most recent review of compliance with these requirements, we found that

83% could provide documentation for income, and

We also found that some lobbyists were unclear about the need to disclose certain previous jobs—including certain executive agency positions. These findings are generally consistent with our prior reports on the subject. 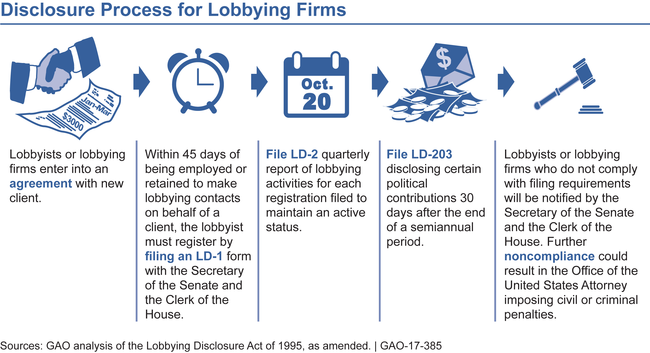 For the 2016 reporting period, most lobbyists provided documentation for key elements of their disclosure reports to demonstrate compliance with the Lobbying Disclosure Act of 1995, as amended (LDA). For lobbying disclosure (LD-2) reports filed during the third and fourth quarters of 2015 and the first and second quarters of 2016, GAO estimates that

90 percent of lobbyists filed required reports for the quarter in which they first registered; the figure below describes the filing process and enforcement;

83 percent (down from 92 percent in 2015) could provide documentation for income and expenses; and

These findings, with the exception of fewer lobbyists who could produce documentation for income and expenses, are generally consistent with prior reports GAO issued for the 2010 through 2015 reporting periods. Although the estimated decline in lobbyists who could document expenses is notable, the decrease is not statistically significant.

As in GAO's other reports, some lobbyists were still unclear about the need to disclose certain previously held covered positions, such as paid congressional internships or certain executive agency positions. GAO estimates that 15 percent of all LD-2 reports may not have properly disclosed 1 or more previously held covered positions. However, over the past several years of reporting on lobbying disclosure, GAO has found that most lobbyists in the sample rated the terms associated with LD-2 reporting as “very easy” or “somewhat easy” to understand.

The U.S. Attorney's Office for the District of Columbia (USAO) stated it has sufficient resources and authority to enforce compliance with the LDA. USAO continued its efforts to bring lobbyists into compliance by prompting them to file reports or applying civil penalties. 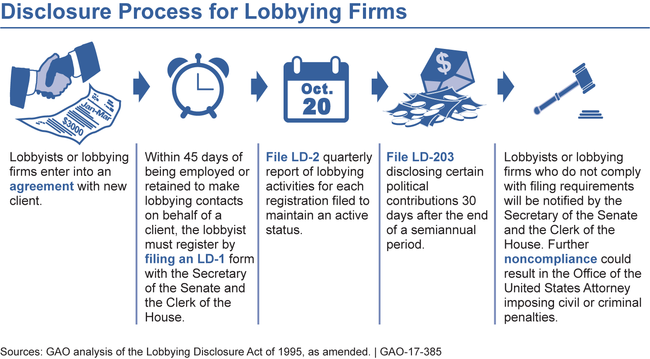 The LDA, as amended, requires lobbyists to file quarterly lobbying disclosure reports and semiannual reports on certain political contributions. The law also requires that GAO annually audit lobbyists' compliance with the LDA. GAO's objectives were to (1) determine the extent to which lobbyists can demonstrate compliance with disclosure requirements, (2) identify challenges to compliance that lobbyists report, and (3) describe the resources and authorities available to USAO in its role in enforcing LDA compliance, and the efforts USAO has made to improve enforcement. This is GAO's 10th report under the mandate.

GAO reviewed a stratified random sample of 78 quarterly disclosure LD-2 reports filed for the third and fourth quarters of calendar year 2015 and the first and second quarters of calendar year 2016. GAO also reviewed 2 random samples totaling 160 LD-203 reports from year-end 2015 and midyear 2016. This methodology allowed GAO to generalize to the population of 46,450 disclosure reports with $5,000 or more in lobbying activity, and 22,820 reports of federal political campaign contributions. GAO met with officials from USAO to obtain status updates on its efforts to focus resources on lobbyists who fail to comply.

GAO provided a draft of this report to the Attorney General for review and comment. The Department of Justice provided technical comments, which GAO incorporated as appropriate. GAO is not making any recommendations in this report.