The Navy took a revolutionary, dual ship approach to buying the Littoral Combat Ship over a decade ago, but this approach has fallen short. LCS has taken longer, cost more, and delivered less capability than expected. The Navy recently decided to pursue a modified LCS that it calls a frigate.

The Navy intends to commit quickly and buy 12 frigates, but the ship's design, cost, and capabilities remain uncertain.

We testified that Congress faces a key decision in 2017—whether to authorize the Navy's strategy for buying all of the frigates, despite significant design and cost uncertainty and no schedule imperative to make such a decision. 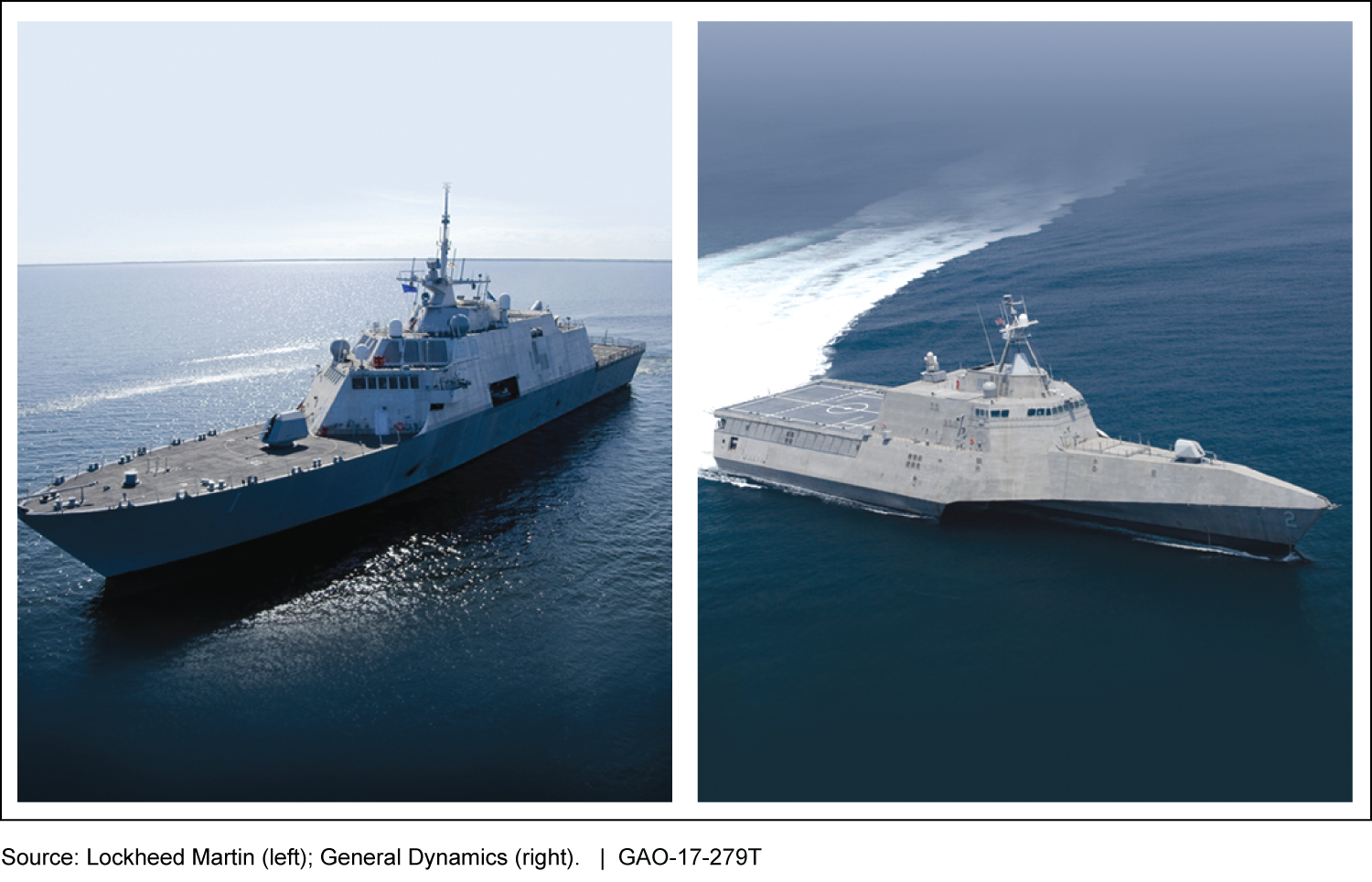 The Navy's vision for the Littoral Combat Ship (LCS) program has evolved significantly over the last 15 years, reflecting degradations of the underlying business case. Initial plans to experiment with two different prototype ships adapted from commercial designs were abandoned early in favor of an acquisition approach that committed to numerous ships before proving their capabilities. Cost, schedule, and capability expectations have eroded over time, as shown in the table below. More recently, the Navy attributed a series of engineering casualties on delivered LCS to shortfalls in crew training, seaframe design, and construction quality.

Evolution of Expectations for the Littoral Combat Ship (LCS) Program

Concerned about the LCS's survivability and lethality, in 2014 the Secretary of Defense directed the Navy to evaluate alternatives. After rejecting more capable ships based partly on cost, schedule, and industrial base considerations, the Navy chose the existing LCS designs with minor modifications and re-designated the ship as a frigate. Many of the LCS's capabilities are yet to be demonstrated and the frigate's design, cost, and capabilities are not well-defined. The Navy proposes to commit quickly to the frigate in what it calls a block buy of 12 ships.

Soon, Congress will be asked to make key decisions that have significant funding and oversight implications, but without having important information. The Navy plans to request fiscal year 2018 authorization for its frigate block buy approach. Of note, the pricing the Navy intends to seek from the shipyards will be for 12 basic LCS. Only later will the shipyards submit their proposals for adding frigate capabilities to the LCS hulls. Congress will be asked to authorize this approach many months before the Department of Defense (DOD) prepares an independent cost estimate. Further, there is no industrial base imperative to continue with the Navy's planned pace for the frigate acquisition. LCS workload backlogs, when combined with 2 LCS awarded earlier in 2016 and 2 more planned for award in fiscal year 2017, will take construction at both shipyards into 2021.

The Navy envisioned a revolutionary approach for the LCS program: dual ship designs with interchangeable mission packages intended to provide mission flexibility at a lower cost. This approach has fallen short, with significant cost increases and reduced expectations about mission flexibility and performance. The Navy has changed acquisition approaches several times. The latest change involves minor upgrades to an LCS design—referred to now as a frigate. Yet, questions persist about both the LCS and the frigate.

GAO has reported on the acquisition struggles facing LCS and now the frigate. This statement discusses: (1) the evolution of the LCS acquisition strategy and where it stands today; (2) key risks in the Navy's plans for the frigate based on the LCS program; and (3) remaining oversight opportunities for the LCS and frigate programs. This statement is largely based on GAO's prior reports and larger work on shipbuilding and acquisition best practices. It incorporates limited updated audit work where appropriate.