Federal agencies respond to abandoned and derelict vessels (ADV) in accordance with federal law, interagency agreements, and funding availability. Federal laws and the National Contingency Plan—the government's blueprint for responding to oil and hazardous substance releases—establish federal agency roles for leading a response to an ADV-related incident based on various factors, such as the type of ADV threat posed and its location (see fig. below). Interagency agreements have also helped to guide federal ADV response efforts. For example, the Coast Guard and Army Corps of Engineers (USACE) signed an agreement in 2012 outlining their procedures for responding to navigation hazards, including sunken vessels. Agencies reported they generally did not have funding to support actions beyond responding to ADVs posing navigation hazards in federally-maintained waterways and pollution and public health threats, nor were they required to do so by federal law or agency policy. 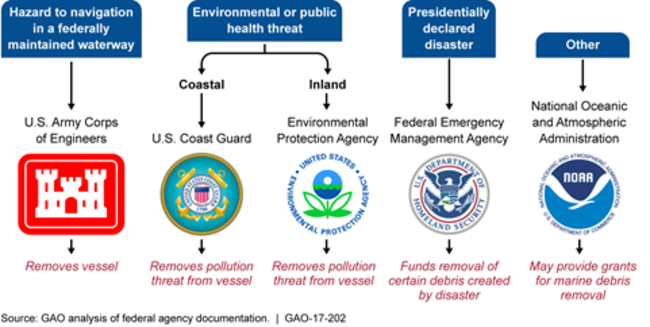 Note: If the responsible party (i.e., vessel owner, lessee, or operator) fails to take action or cannot be identified, the appropriate agency may proceed with removal of the hazard.

The Coast Guard, Environmental Protection Agency (EPA), USACE, Federal Emergency Management Agency (FEMA), and National Oceanic and Atmospheric Administration (NOAA) maintain data on responses to, and associated expenditures for, pollution and navigation threat incidents in U.S. waterways, which sometimes have involved ADVs. GAO analysis determined that these agencies expended at least $58 million on ADV response from fiscal year 2005 through 2015. Over two thirds of these expenditures were associated with two ADV-response cases, in 2008 and 2011.

The 28 coastal states that responded to GAO's survey reported on their various ADV-related actions and perspectives on factors affecting their ability to address ADVs—including limitations on their state authority and insufficient funding.

ADVs can block navigable U.S. waterways and pose threats to the environment, and public health and safety, as fuel and hazardous material can leak into the water as the vessels deteriorate. Multiple federal agencies have responsibility for responding to ADV-related incidents, while states may also address ADVs through their own laws and policies. GAO was asked to review actions federal and state agencies have taken to address ADVs in U.S. waterways. This report examines (1) key factors that guide how federal agencies respond to ADVs; (2) the extent federal agencies track ADVs and their expenditures for responding to them; and (3) actions states have taken to address ADVs and the factors they cite as affecting their efforts.

GAO reviewed federal laws and policies which guide ADV-related actions for the Coast Guard, EPA, USACE, NOAA, and FEMA, and analyzed these agencies' ADV-related caseload and expenditure data for fiscal years 2005 through 2015, the most current available data. GAO interviewed agency headquarters and field-based officials in four states, selected for their geographic diversity and varying state laws and actions regarding ADVs. GAO also surveyed 30 coastal states regarding their ADV-related actions, expenditures and challenges.

GAO is not making recommendations in this report. Agencies provided technical comments on a draft of this report, which GAO incorporated, as appropriate.

Abandoned Boats! Who Responds to Abandoned and Derelict Boats and other Vessels?