NASA contracted with two companies, Boeing and SpaceX, to develop and produce vehicles to transport astronauts to the International Space Station. But first, NASA has to certify that the vehicles meet its requirements and are safe for human spaceflight.

Both companies have experienced delays and do not expect to meet their original 2017 certification dates. If these delays continue, certification could be pushed into 2019—which is when the U.S.'s contract with Russia for ISS transportation ends.

We recommended that NASA come up with a backup plan for ISS transportation in case certification is delayed, and report on that plan to Congress. 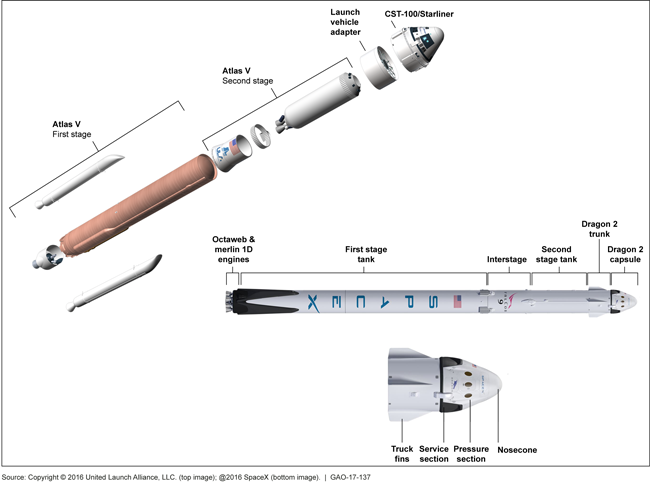 Both of the Commercial Crew Program's contractors have made progress developing their crew transportation systems, but both also have aggressive development schedules that are increasingly under pressure. The two contractors—Boeing and Space Exploration Technologies, Corp. (SpaceX)—are developing transportation systems that must meet the National Aeronautics and Space Administration's (NASA) standards for human spaceflight—a process called certification. Both Boeing and SpaceX have determined that they will not be able to meet their original 2017 certification dates and both expect certification to be delayed until 2018, as shown in the figure below. The schedule pressures are amplified by NASA's need to provide a viable crew transportation option to the International Space Station (ISS) before its current contract with Russia's space agency runs out in 2019. If NASA needs to purchase additional seats from Russia, the contracting process typically takes 3 years. Without a viable contingency option for ensuring uninterrupted access to the ISS in the event of further Commercial Crew delays, NASA risks not being able to maximize the return on its multibillion dollar investment in the space station.

Both contractors are also dealing with a variety of risks that could further delay certification, including program concerns about the adequacy of information on certain key systems to support certification. Another top program risk is the ability of NASA and its contractors to meet crew safety requirements.

Since the Space Shuttle was retired in 2011, the United States has been relying on Russia to transport astronauts to and from the ISS. The purpose of NASA's Commercial Crew Program is to facilitate the development of a domestic transport capability. In 2014, NASA awarded two firm-fixed-price contracts to Boeing and SpaceX with a combined total value up to $6.8 billion for the development of crew transportation systems that meet NASA requirements and initial missions to the ISS. The contractors were originally required to provide NASA all the evidence it needed to certify that their systems met its requirements by 2017.

A house report accompanying H.R. 2578 included a provision for GAO to review the progress of NASA's human exploration programs. This report examines the Commercial Crew Program including (1) the extent to which the contractors have made progress towards certification, (2) the risks facing the program, and (3) the extent to which the program has visibility into the contractors' efforts. To do this work, GAO analyzed contracts, schedules, and other documentation; and spoke with officials from NASA, the Commercial Crew Program, Boeing, SpaceX, and independent review bodies.

Given the delays in the Commercial Crew Program, GAO recommends that NASA develop and report to Congress on its contingency plans for maintaining a U.S. presence on the ISS beyond 2018. NASA concurred with the recommendation and intends to develop a contingency plan.