In 2015 the Organization for Economic Co-Operation and Development issued a plan to combat multinational corporations shifting profits from country to country, potentially to exploit differences in tax systems. The plan included revised guidance on transfer pricing—the price of shifting property between related parties.

When related parties transfer assets, there is the risk of making or losing money. OECD provides guidance on how to allocate risk, but we found that the guidance doesn't adequately account for who bears the risk. The IRS is also working to minimize its costs for the related new country-by-country data sharing requirement. 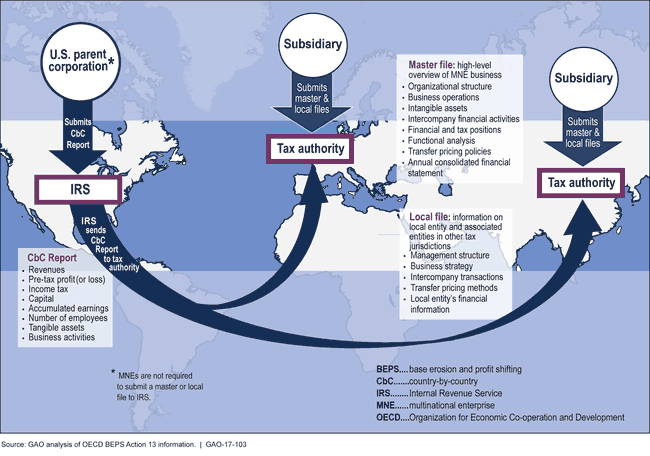 In 2015, the Organization for Economic Co-Operation and Development (OECD) issued revised guidelines, including 15 actions to help reduce base erosion and profit shifting (BEPS) of multinational enterprises (MNEs). One action focuses on transfer pricing guidance with the intent of aligning MNE profits with the location of economic activity, and preventing corporations from shifting and assigning profits to lower-taxed related corporations by artificially setting below-market transfer prices of property and services. Another action makes MNE activities more transparent, through documentation and reporting shared among countries.

Transfer Pricing Guidance: OECD's guidance emphasizes that transfer price analysis should reflect actual economic activities, such as who controls decisions related to risk and who has the financial capacity to bear the risk. This clarifies prior guidelines, which also included risk analysis based on functions, but that now focus on the parties' ability to control and finance risk. GAO found that

Administration costs of implementing the guidelines will be minor according to Internal Revenue Service (IRS) officials because IRS's transfer price reviews are consistent with the revised guidance. However, taxpayer compliance costs are uncertain because they will depend on how MNEs respond to the revisions.

According to stakeholders and industry literature, U.S. employment and investment are unlikely to be significantly affected because the transfer pricing guidance affects a relatively narrow area of the tax code.

CbC reporting may decrease BEPS because more consistent information will be available to tax authorities on the worldwide activities of MNEs.

According to IRS officials, CbC implementation costs are uncertain at this time, but can be mitigated by using existing systems and processes. However, MNE compliance costs would likely increase due to new data system needs, according to stakeholders.

The economic effect of CbC reporting is uncertain because it depends on the extent to which MNEs move business functions to low-tax countries in response to the potential increased scrutiny of BEPS.

Globalization has increased incentives for multinational corporations to shift profits from country to country to use differences in the countries' corporate tax systems to reduce taxes. This profit shifting can lead to the erosion of U.S. and other countries' corporate tax bases, reducing tax revenues. OECD did a comprehensive analysis of corporate base erosion and profit shifting and, in the fall of 2015, issued 15 action plans to address the problem. GAO was asked to analyze the effects on the U.S. economy of adopting OECD actions.

GAO analyzed the potential effects of the two actions furthest along in implementation: revised transfer pricing guidelines and new transfer pricing documentation, including country-by-country reporting. For these actions, GAO examined (1) how likely it is that the action would reduce BEPS, (2) what is known about the potential administrative and compliance costs of the action, and (3) what is known about the potential effects the actions could have on the U.S. economy. GAO reviewed documents, conducted a literature review, and interviewed officials from IRS, the U.S. Department of the Treasury, OECD, and trade groups of industries likely to be affected by the actions.

GAO does not make recommendations in this report. GAO provided a draft of this report to IRS and Treasury for review and comment. IRS provided technical comments, which were incorporated, as appropriate.