Avoiding a "brain drain" in the federal workforce

Avoiding a "brain drain" in the federal workforce

With more than 30% of federal employees eligible to retire by 2019, a lot of jobs could open up that the current federal workforce can't fill. So, the government needs to recruit and retain the next generation of workers.

Strong employee engagement—a positive feeling about one's employer and its mission—tends to help agencies hire and keep employees. You might think that millennials are less engaged than other age groups, but the data in this testimony showed that engagement doesn't vary much by age. Engagement increases for everyone when agencies demonstrate that they value their employees. 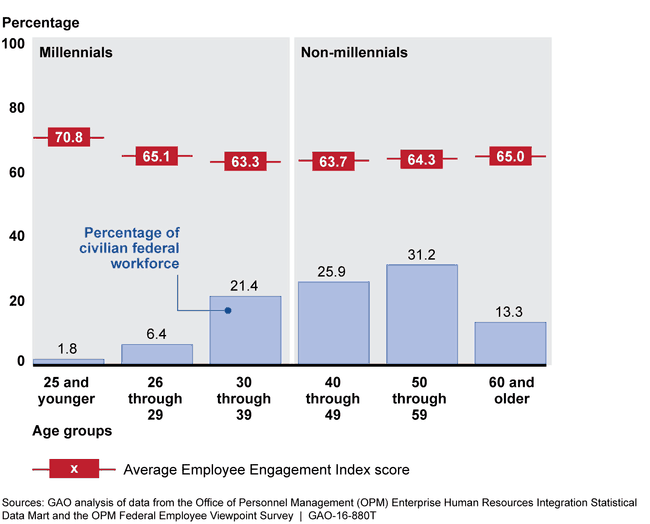 In 2015, millennial employees in the federal government had an estimated Employee Engagement Index (EEI) score of 63.8 – as derived from the Office of Personnel Management's Federal Employee Viewpoint Survey – which is less than one percentage point lower than non-millennials. Engagement is usually defined as the sense of purpose and commitment employees feel towards their employer and its mission. As shown in the figure below, millennial subgroups had both the highest and lowest EEI scores among all age groups in 2015—employees 25 and younger had the highest EEI score (70.8), while employees 30 to 39 years old had the lowest EEI score (63.3). 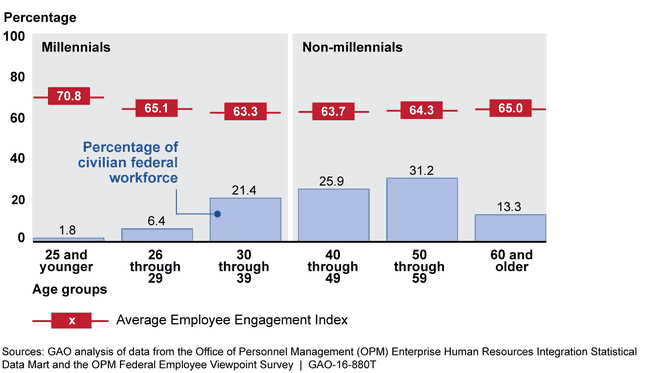 Note: The EEI estimates shown in this figure have sampling variability of no more than plus or minus 1.6 percentage points at the 95 percent level of confidence.

Key drivers of engagement can help agencies develop a culture of engagement. GAO's regression analysis identified six practices as key drivers of the EEI, which were similar for both millennials and non-millennials: (1) constructive performance conversations, (2) career development and training, (3) work-life balance, (4) inclusive work environment, (5) employee involvement, and (6) communication from management. As GAO found in a 2015 report on employee engagement, building a culture of engagement involves effective management strategies such as leadership involvement, strong interpersonal skills of supervisors, and thoughtful use of data.

GAO's prior work found that skills gaps in government-wide fields such as cybersecurity are threatening the ability of agencies to carry out their missions. At the same time, government-wide trends in federal workforce retirement threaten to aggravate the problem. To help ensure agencies have the capacity to address complex national challenges, agencies need to be competitive for top talent, including those in the millennial generation.

This statement is based on GAO's 2015 review of the trends and drivers of government-wide employee engagement and our larger body of work on federal human capital, issued primarily between January 2014 and September 2016, and is updated with more recent information. Millennials are commonly considered as those born between the early 1980s and 2000. However, for the purposes of this statement GAO is including all employees 39 years old and younger as millennials in order to provide a consistent definition across datasets.

GAO is not making any new recommendations in this testimony. We have previously made recommendations to the Office of Personnel Management (OPM) to improve engagement government-wide, which OPM has implemented.