A new policy tool called "tiered evidence grantmaking" allows federal agencies to award smaller amounts of grant funding to test promising ideas, and larger amounts to replicate practices with strong evidence of success. To help support innovation and reward results, agencies collect information on how health care, education, and social service projects are performing throughout the life of their grants.

We recommended that the Office of Management and Budget establish a way for agencies to work together and share leading practices as they attempt to tie resources to results.

Overview of a Tiered Evidence Grant Model with Three Tiers 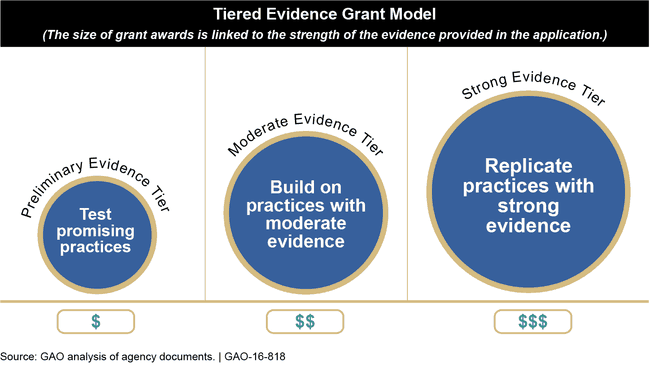 Graphic with small, medium, and large circles representing the grant funding at each evidence tier

Tiered evidence grants are a new policy tool federal agencies are using to incorporate evidence of effectiveness into grantmaking. Under this approach, agencies establish tiers of grant funding based on the level of evidence grantees provide on their models for providing social, educational, health, or other services. Smaller awards are used to test new and innovative service models; larger awards are used to scale service models with strong evidence. To implement tiered evidence grants, agencies add evidence and evaluation requirements throughout the federal grant life cycle, including conducting independent evaluations of the grantees' service models and disseminating the evaluation results.

Overview of a Tiered Evidence Grant Model with Three Tiers

Note: Some programs have two tiers—preliminary evidence and strong evidence.

Agency officials identified several potential benefits of using tiered evidence grants, such as providing incentives for grantees to implement service models supported by evidence and conducting evaluations to build the evidence base. Officials from the agencies in GAO's review and grantees also identified various challenges with tiered evidence grants. In some cases the agencies identified factors to mitigate the challenges. For example, grantees told GAO that they encountered challenges drafting evaluation plans (which describe the methodology and are generally required for the grant applications). As an example of how agencies addressed this challenge, the Department of Labor contracted with a program evaluation firm to provide grantees with technical assistance and increased the time for grantees to draft evaluation plans that accurately reflected their service models.

GAO has previously reported on collaborative mechanisms, such as interagency groups, that can be used to implement programs and share lessons learned. However, currently there is no formal mechanism administered by OMB for agencies to collaborate on tiered evidence grants. By relying on ad hoc collaboration, agencies may miss opportunities to capture and share lessons learned that could strengthen tiered evidence grantmaking.

The federal government spends more than $600 billion a year on grants to fund a wide range of programs and services, including those related to social services, education, and health care. To better integrate evidence and rigorous evaluation in federal grantmaking, the Office of Management and Budget (OMB) has encouraged federal agencies to use tiered evidence grant programs.

GAO recommends that OMB establish a formal means for federal agencies to collaborate on tiered evidence grants. OMB had no comments on the recommendation.