U.S. agencies and the Smithsonian Institution (Smithsonian) have undertaken five types of activities to protect Iraqi and Syrian cultural property since 2011, which include awareness raising, information sharing, law enforcement, overseas capacity building, and destruction prevention. For example, the Department of Homeland Security reported coordinating with the Federal Bureau of Investigation and other agencies to open 18 Iraqi and Syrian cultural property cases—such as those regarding smuggling by individuals and international criminal organizations—between 2011 and February 2016. To enhance the capacity of partners overseas, the Department of State (State), the government of Iraq, and others established an archaeological and cultural management training facility in Erbil, Iraq. In addition, to prevent destruction, the Smithsonian and others trained Syrian antiquities professionals to use sandbags and other materials to protect ancient mosaics at a Syrian museum, reportedly resulting in the successful protection of the museum collection when it was bombed.

Types of Iraqi and Syrian Items at Risk of Being Trafficked 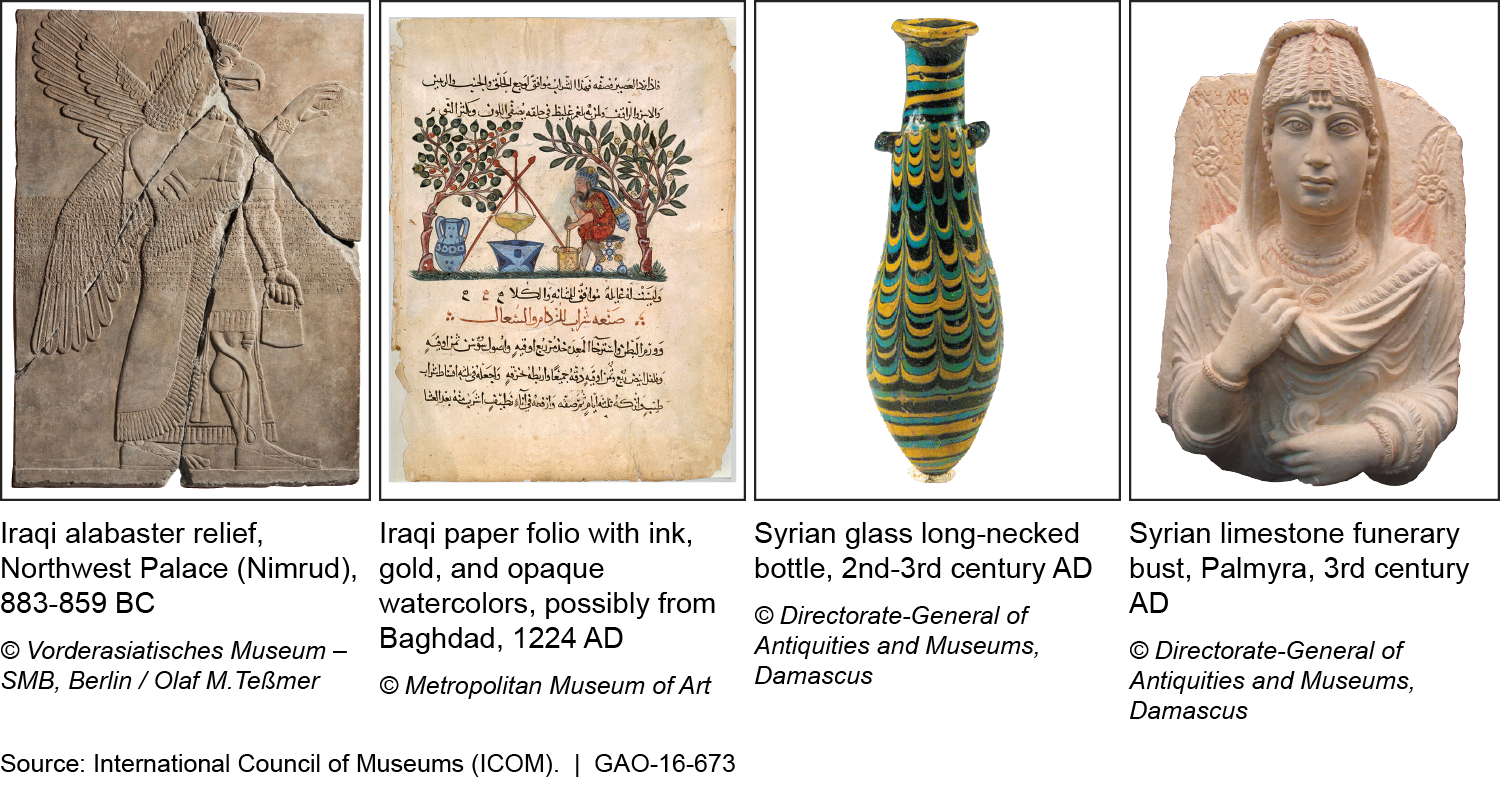 Art market experts identified suggestions related to improving information sharing, clarifying guidance, creating a strategy, and establishing a Department of Defense contact as most important to improving U.S. government activities for cultural property protection. For example, art market experts suggested U.S. agencies could work with nongovernmental entities, such as museums overseas and foreign countries, to improve data management. Specifically, they suggested the creation of a database including information, such as museum catalogues, that could help verify if art market items were stolen. U.S. officials GAO contacted generally agreed with this suggestion and reported some ongoing work in this area. For example, State officials noted that State provides funding to support several projects annually to inventory museum and archaeological sites, including in countries where cultural property may be at risk. Agency officials had various responses to other art market experts' suggestions.

The Islamic State of Iraq and Syria (ISIS) and other groups have seized upon the conflicts in Iraq and Syria to destroy, loot, and traffic cultural property, including antiquities. According to the United Nations (UN), this destruction and looting has reached unprecedented levels. The UN has also reported that since the civil war in Syria began in 2011, ISIS has used the sale of looted Iraqi and Syrian cultural property to generate income to strengthen its capabilities to carry out attacks. Under the Convention on Cultural Property Implementation Act, signed into law in 1983, and other laws, the United States has restricted the importation of certain, but not all, Iraqi and Syrian cultural property.

GAO Nerds Out for Comic-Con