The Capital Purchase Program (CPP) largely has wound down and the Department of the Treasury's (Treasury) returns on CPP investments surpassed the original amount disbursed. As of February 29, 2016, Treasury had received $226.7 billion in repayments and income from its CPP investments, exceeding the amount originally disbursed by almost $22 billion. As of the same date, 16 of the 707 institutions remained in the program. Treasury's most recent estimate of lifetime income for CPP (as of Nov. 30, 2015) was about $16 billion.

Status of the Capital Purchase Program, as of February 29, 2016 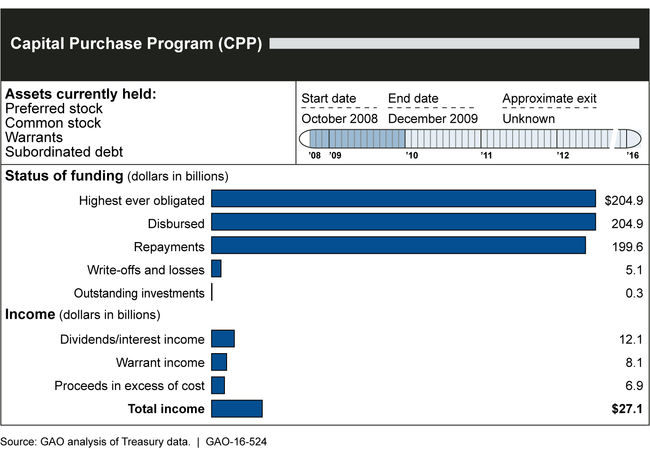 Most of the remaining CPP institutions have continued to exhibit signs of financial weakness. Specifically, 9 of the 16 institutions had negative returns on average assets (a common measure of profitability) in 2015. Also, 6 institutions had a lower return on assets in 2015 than they did at the end of 2011. Treasury officials stated that the remaining CPP firms generally had weaker capital levels and worse asset quality than firms that had exited the program. Also, nearly all the firms that are required to pay dividends have continued to miss payments.

CPP was established as the primary means of restoring stability to the financial system under the Troubled Asset Relief Program (TARP). Under CPP, Treasury invested almost $205 billion in 707 eligible financial institutions between October 2008 and December 2009. CPP recipients have made dividend and interest payments to Treasury on the investments. The Emergency Economic Stabilization Act of 2008 includes a provision that GAO report at least every 60 days on TARP activities. This report examines (1) the status of CPP, (2) the financial condition of institutions remaining in the program, and (3) Treasury's strategy for winding down the program.

GAO provided a draft of this report to Treasury for its review and comment. Treasury provided technical comments that GAO incorporated as appropriate.