The Department of Homeland Security's (DHS) Transportation Security Administration (TSA) has implemented 51 of the 58 recommendations GAO made from October 1, 2003, through July 31, 2015, to improve TSA's acquisition of security-related technology. GAO's recommendations generally directed TSA to develop a plan; conduct an analysis; or implement a program, policy, or procedure. For example, in March 2014, GAO recommended that TSA establish protocols to capture operational data on secondary screening of passengers at the checkpoint, to help ensure screening officers' performance. 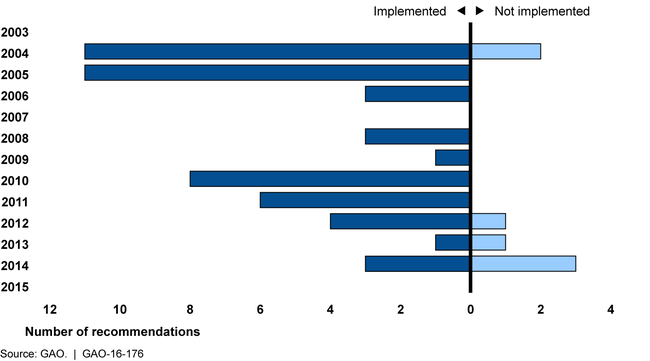 Since fiscal year 2003, GAO has identified approximately $1.7 billion in financial benefits, largely representing funds that TSA used to support other programs and activities, based on implementation of GAO's recommendations as well as findings from related GAO reports and testimonies on security-related technology acquisitions. GAO has also documented additional benefits, including programmatic and process improvements to TSA's programs, such as improvements to TSA's Electronic Baggage Screening Program's cost estimating processes.

GAO determined the number and status of recommendations made to TSA from October 1, 2003, after TSA had become a part of the newly created DHS, through July 31, 2015, as well as the benefits derived from the recommendations TSA implemented, using an internal database that GAO maintains on the status of recommendations it makes. GAO specifically identified recommendations related to the acquisition of technology that helps TSA prevent or defend against threats to domestic transportation systems. TSA concurred with GAO's list of recommendations. TSA also provided technical comments on a draft of this report which GAO incorporated as appropriate. DHS did not provide formal comments.