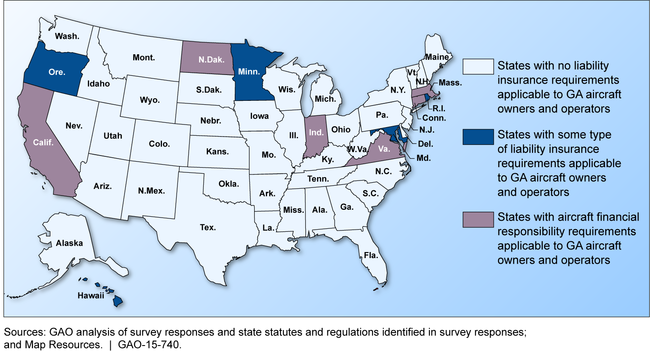 Annual premiums for liability insurance vary depending on the type of aircraft insured and a pilot's experience. For example, three nationwide brokers GAO contacted noted that an annual premium for a common 4-seat GA aircraft, a Cessna 172, can range from $200 to $550 for a policy that provides $1 million in coverage per accident, with a limit of $100,000 for each accident victim.

GAO interviewed 73 aviation stakeholders who most frequently cited five factors that they felt should be considered in determining whether to adopt a federal liability insurance requirement. Understanding the extent of the problem—both the number of GA aircraft owners who are uninsured and underinsured and the extent to which accident victims received little or no compensation from such owners—was one such factor. However, data on the extent of this problem are not available and, according to FAA and NTSB officials, could be challenging to collect. Four other factors cited include: (1) costs to victims and the public in the absence of liability insurance; (2) costs to the GA community if such a requirement were adopted; (3) issues related to the implementation and administration of such a requirement; and (4) the potential public-safety benefits.

A substantial proportion of all domestic aviation accidents and fatalities that occur each year involve GA, which includes all aviation except commercial and military. Under federal law, the Secretary of Transportation is responsible for ensuring that commercial air carriers carry liability insurance. However, no such federal requirements exist for GA aircraft owners. In some cases, accidents involving uninsured or underinsured GA aircraft owners have occurred where individuals (passengers or third parties) who incurred losses received little or no compensation.