Pay for Success (PFS), also known as Social Impact Bonds, is a new contracting mechanism to fund prevention programs, where investors provide capital to implement a social service— for example, to reduce recidivism by former prisoners. If the service provider achieves agreed upon outcomes, the government pays the investor, usually with a rate of return, based on savings from decreased use of more costly remedial services, such as incarceration. Stakeholders from the 10 PFS projects in GAO's study said that PFS offers potential benefits to all parties in the project. For example, governments can implement prevention programs that potentially lead to reduced spending on social services and transfer the risk of failing to achieve outcomes to investors. 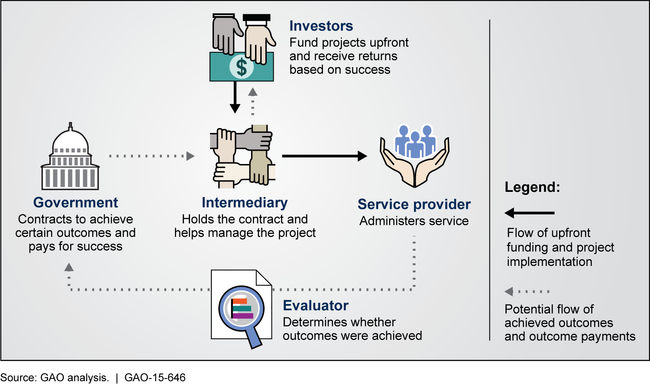 The PFS projects in GAO's review sought to manage potential risks in the feasibility assessment, design, and implementation of complex PFS contracts. For example, without safeguards, there is a risk that paying for outcomes could create perverse incentives, such as focusing on individuals who are easiest to serve rather than those most in need. To address this risk, PFS contracts included various provisions, such as only including those with the greatest need in the evaluation that determines if the government makes payments.

To date, federal government involvement in PFS has been limited. The Office of Management and Budget (OMB) has encouraged agencies to explore the use of PFS as appropriate. Potential roles federal agencies could play in PFS projects include making outcome payments or helping build capacity. We have previously reported that collaborative mechanisms, such as interagency groups, can be used to implement programs and share information. However, a formal mechanism for federal agencies to collaborate on PFS does not exist. Given the evolving nature of PFS, a mechanism for federal agencies to collaborate on PFS would increase access to leading practices.

To address these objectives, GAO reviewed relevant literature on PFS; selected 10 PFS projects that reflected a variety of policy areas and were in different stages of implementation in state and local governments in the United States and the United Kingdom, where PFS originated; reviewed key documents and interviewed stakeholders from organizations that played a role in the selected projects; and reviewed documents and interviewed officials from the eight federal agencies that participated in an informal PFS working group.

To identify and broadly disseminate information on leading practices and lessons learned, the Director of OMB should establish a formal means for federal agencies to collaborate on PFS. OMB concurred with this recommendation and is working with agencies to explore options for collaboration.

Infographic on Pay for Success Projects