From 2006 through 2014, government-wide engagement levels—as measured by the Office of Personnel Management's (OPM) Employee Engagement Index (EEI)—increased to an estimated high of 67 percent in 2011 and then declined to an estimated 63 percent in 2014. This decline is attributable to several large agencies—including the Department of Defense—bringing down the government-wide average. The government-wide decline masks the fact that the majority of federal agencies either sustained or increased EEI levels during the period. Of the three components that comprise the EEI—employees' perceptions of agency leaders, supervisors, and their intrinsic work experience—perceptions of leaders consistently received the lowest score. 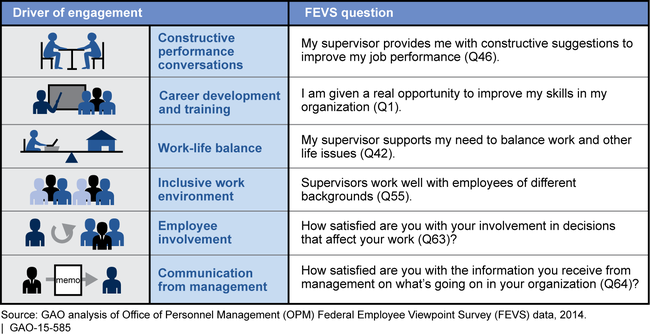 For example, at one agency, supervisors and employees developed a set of topics for quarterly performance conversations to ensure that employees receive consistent and regular constructive feedback and coaching.

OPM developed resources to help agencies use EEI data to strengthen employee engagement but fell short of supporting a holistic approach to improving engagement and linking to performance. For example, OPM does not report whether annual EEI changes are statistically significant—that is, whether the changes were meaningful or due to random chance. Likewise, OPM does not analyze which FEVS questions are associated with higher EEI scores. This information would help agencies better focus their efforts to improve engagement and target resources. Further, OPM has provided limited examples or lessons learned on linking engagement to agency performance, which agencies will need to inform their next survey cycle.

Research on both private- and public-sector organizations has found that increased levels of engagement—generally defined as the sense of purpose and commitment employees feel toward their employer and its mission—can lead to better organizational performance.

To meet these objectives, GAO analyzed responses to FEVS questions from 2006 through 2014, conducted a regression analysis, and reviewed OPM documents and interviewed OPM and other agency officials.

GAO recommends that the Director of OPM take the following three actions: (1) report annually on drivers of the EEI, (2) provide information on statistically significant changes in EEI scores, and (3) share examples and lessons learned to improve engagement and link engagement to performance in time to inform results of the next survey cycle. OPM concurred with the first recommendation and partially concurred with the second and third recommendations. GAO continues to believe that additional action on these recommendations is needed as discussed in the report.