GAO found that the Department of Defense (DOD) did not apply the U.S. contractor preference in accordance with the current statute from October 2010 through May 2014. The fiscal year 2014 Consolidated Appropriations Act directs that military construction contracts valued over $1 million and located in countries bordering the Arabian Sea, U.S. territories in the Pacific, and the Kwajalein Atoll, be awarded to a U.S. contractor unless their price is 20 percent higher than the price from a competing non-U.S. contractor with an equally responsive and responsible bid. However, DOD incorrectly applied the preference to countries bordering the Arabian Gulf, which is geographically distinct from the Arabian Sea (see figure). DOD officials were unaware the statute changed the preference from “Arabian Gulf” to “Arabian Sea” in 2002 and therefore had not updated DOD's acquisition guidance. DOD's application, however, included the geographic area in which the majority of military construction in the Arabian Sea and Arabian Gulf locations took place from October 2010 through May 2014. GAO also found that due to other factors that are also considered, such as a contractor's experience, the preference potentially only affected 2 of the 35 award decisions for military construction contracts since fiscal year 2011. DOD updated its guidance during GAO's review, but it could become outdated, again, if a congressional bill becomes effective, as the bill would change the locations subject to the preference in fiscal year 2015. 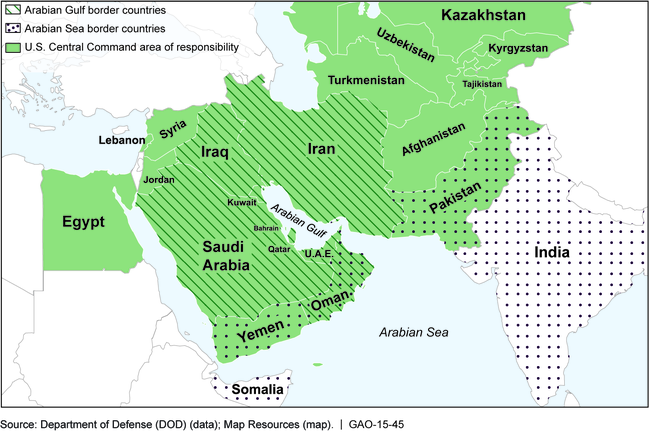 GAO also found that DOD and State Department officials identified potential benefits and problems with expanding the statute to include all of the countries within the U.S. Central Command area of responsibility. For example, according to the officials, one potential benefit of contracting with U.S. firms would be greater familiarity with U.S. contracting and construction procedures. However, these officials also told GAO the 20 countries in the CENTCOM area vary widely in their local capacities, economies, and strategic concerns. Therefore, an expansion may run counter to specific U.S. policy goals in certain locations.

Since the 1980s, Congress has mandated a preference for U.S. contractors for military construction contracts in certain overseas countries. In the Joint Explanatory Statement of the Consolidated Appropriations Act for Fiscal Year 2014, Congress mandated that GAO examine the potential benefits and problems of expanding this preference to the countries that make up the CENTCOM area of responsibility.

GAO is not making recommendations in this report. DOD and State Department reviewed the draft of the report but did not provide any comments.