Since fiscal year 2010, the Internal Revenue Service (IRS) budget has declined by about $900 million. As a result, funding is below fiscal year 2009 levels. 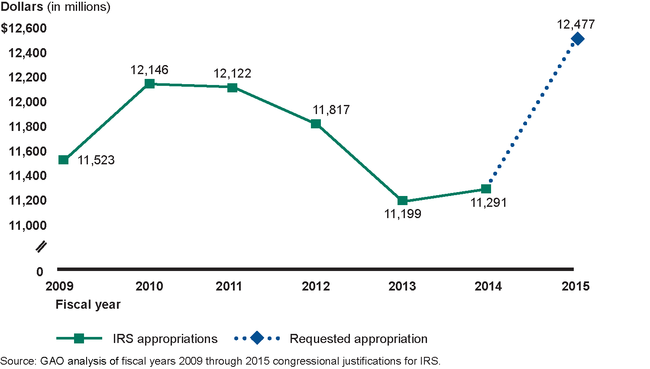 Staffing has also declined by about 10,000 full-time equivalents since fiscal year 2010, and performance has been uneven. For example, between fiscal years 2009 and 2013, the percentage of callers seeking live assistance and receiving it fluctuated between 61 percent and 74 percent. IRS took some steps to address budget cuts, such as reduced travel and training.

IRS's strategic plan does not address managing budget uncertainty, although there are several indicators that funding will be constrained for the foreseeable future. For example, in May 2014, the Office of Management and Budget (OMB) generally required a 2 percent reduction in agencies' fiscal year 2016 budget submission. OMB guidance also requires agencies to develop strategies for operating in an uncertain budget environment. According to IRS, extensive senior leadership turnover has contributed to the lack of a long-term strategy. Without a strategy, IRS may not be able to operate effectively and efficiently in an uncertain budget environment.

For fiscal year 2015, IRS calculated projected return on investment (ROI) for most of its enforcement initiatives. However, due to limitations—such as estimating the indirect effect coverage has on voluntary compliance—IRS does not calculate actual ROI or use it for resource decisions. These limitations are important, which is why GAO recommended in 2012 that IRS explore developing such estimates. Given that these limitations could take time to address, GAO demonstrated how IRS could use existing ROI data to review disparities across different enforcement programs to inform resource allocation decisions. Comparing projected and actual ROI is consistent with OMB guidance. While not the only factor in making resource decisions, actual ROI could provide useful insights on the productivity of a program.

The financing of the federal government depends largely upon the IRS's ability to collect taxes, including providing taxpayer services that make voluntary compliance easier and enforcing tax laws to ensure compliance with tax responsibilities. For fiscal year 2015, the President requested a $12.5 billion budget for IRS, a 10.5 percent increase over the fiscal year 2014 budget.

Because of the size of IRS's budget and the importance of its service and compliance programs for all taxpayers, GAO was asked to review the fiscal year 2015 budget request for IRS. (In April 2014, GAO reported interim information on IRS's budget.) Among other things, this report assesses IRS's (1) strategy to address budget cuts and (2) use of ROI analysis. To conduct this work, GAO reviewed the fiscal year 2015 budget justification, IRS and OMB budget guidance, and IRS workload and performance data from fiscal years 2009 to 2015. GAO also interviewed IRS officials and the National Taxpayer Advocate.

GAO recommends that IRS (1) develop a long-term strategy to manage uncertain budgets, and (2) calculate actual ROI for implemented initiatives, compare actual ROI to projected ROI, and use the data to inform resource decisions. IRS agreed with GAO's recommendations, noting that it initiated a review of its base budget to ensure resources are aligned with its strategic plan and ROI is one of several factors relevant to making resource allocation decisions.