IRS’s appropriations have declined to below fiscal year 2009 levels and FTEs have been reduced by about 8,000 since fiscal year 2009. Planned performance in enforcement and taxpayer service has decreased or fluctuated; for example, in the fiscal year 2014 congressional justification the audit coverage target for individual examinations was 1.0 percent for fiscal year 2014, however, the target was lowered to 0.8 percent in the fiscal year 2015 congressional justification. Amidst lower demand, IRS’s telephone level of service performance (the percentage of callers seeking live assistance and receiving it) was 73 percent from January 1 through March 15, 2014 compared to 69 percent during the same period last year. However, between fiscal years 2009 and 2013, IRS’s telephone level of service fluctuated between 61 percent and 74 percent. Average wait times have almost doubled since fiscal year 2009—from 8.8 minutes to 16.8 minutes as of mid-March 2014.

Not including other budgetary resources such as user fees, the fiscal year 2015 budget request for IRS is $12.5 billion, which is an increase of 10.5 percent ($1.2 billion) in funding and 8.3 percent in staffing (6,998 FTEs) over fiscal year 2014. According to the President’s budget, of the requested $1.2 billion, $480 million is predicated on a cap adjustment—funding above the discretionary spending limit—and largely covers enforcement and infrastructure initiatives. IRS’s workload has increased as a result of legislative mandates and priority programs, such as work related to the Patient Protection and Affordable Care Act and identity theft.

IRS has absorbed approximately $900 million in budget cuts since fiscal year 2010 through savings and efficiencies and by reducing, delaying, or eliminating services. For example, IRS delayed two information technology projects (Information Reporting and Document Matching and Return Review Program) and substantially reduced employee training. To help improve operations, the President requested a large budget increase for IRS in fiscal year 2015. However, additional funding is not the only solution. We have open recommendations on IRS’s operations that may help it achieve efficiencies over time, such as developing a long-term plan to improve web services. 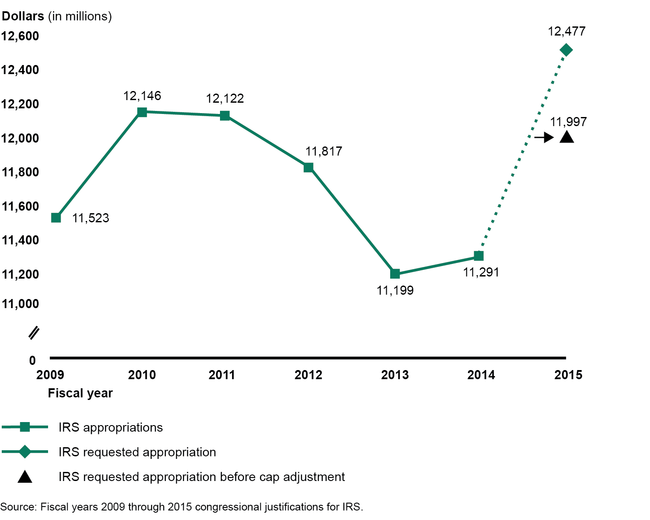 Note: Fiscal year 2013 levels represent an across-the-board rescission and reductions required by sequestration. In fiscal year 2014, IRS received $92 million for the improvement of services to taxpayers, refund fraud and identity theft, and international and offshore compliance issues. The operating plan, which has not been approved as of April 11, 2014 proposes allocating $34 million to Taxpayer Services and $58 million to Operations Support. In addition, IRS has proposed to transfer $69.2 million from Enforcement to Operations Support for information technology infrastructure ($40 million) and a program reclassification ($29.2 million). Amounts shown do not include other budgetary resources.

The financing of the federal government depends largely on IRS's ability to administer the tax laws, which includes providing service to taxpayers and enforcing the law to ensure everyone pays the taxes they owe. Each tax filing season is an enormous undertaking during which IRS processes most tax returns and provides services including telephone, correspondence, and website assistance for tens of millions of taxpayers.

Because of the size of IRS's budget and the importance of its programs, including key taxpayer services provided during the filing season, GAO was asked to review the fiscal year 2015 budget request and assess the 2014 tax filing season. This report describes funding, staffing, and performance trends; IRS’s FY 2015 budget request and workload; and IRS’s actions to absorb budget cuts and opportunities to help IRS more strategically manage operations. To conduct this work, we analyzed key trends, the fiscal year 2015 justification, and other IRS data, such as FTEs for priority programs. We interviewed IRS officials in the Office of the Chief Financial Officer.