One measure of the health and readiness of a military aircraft fleet is the mission capable rate—the percentage of total time aircraft can fly and perform at least one mission.

We examined whether 46 types of aircraft met their annual mission capable goals for FYs 2011-2019. We found:

3 met their goals in a majority of the years

24 did not meet their goals in any year

We also reviewed annual operating and support costs for these aircraft, such as maintenance costs. These costs totaled over $49 billion in FY 2018, ranging from $118 million for the Navy's KC-130T Hercules to $4.2 billion for the Air Force's KC-135 Stratotanker.

An Air Force KC-10 Extender tanker preparing to refuel an Air Force B-2 Spirit Bomber — both of which met readiness goals in 3 of the 9 years we examined. 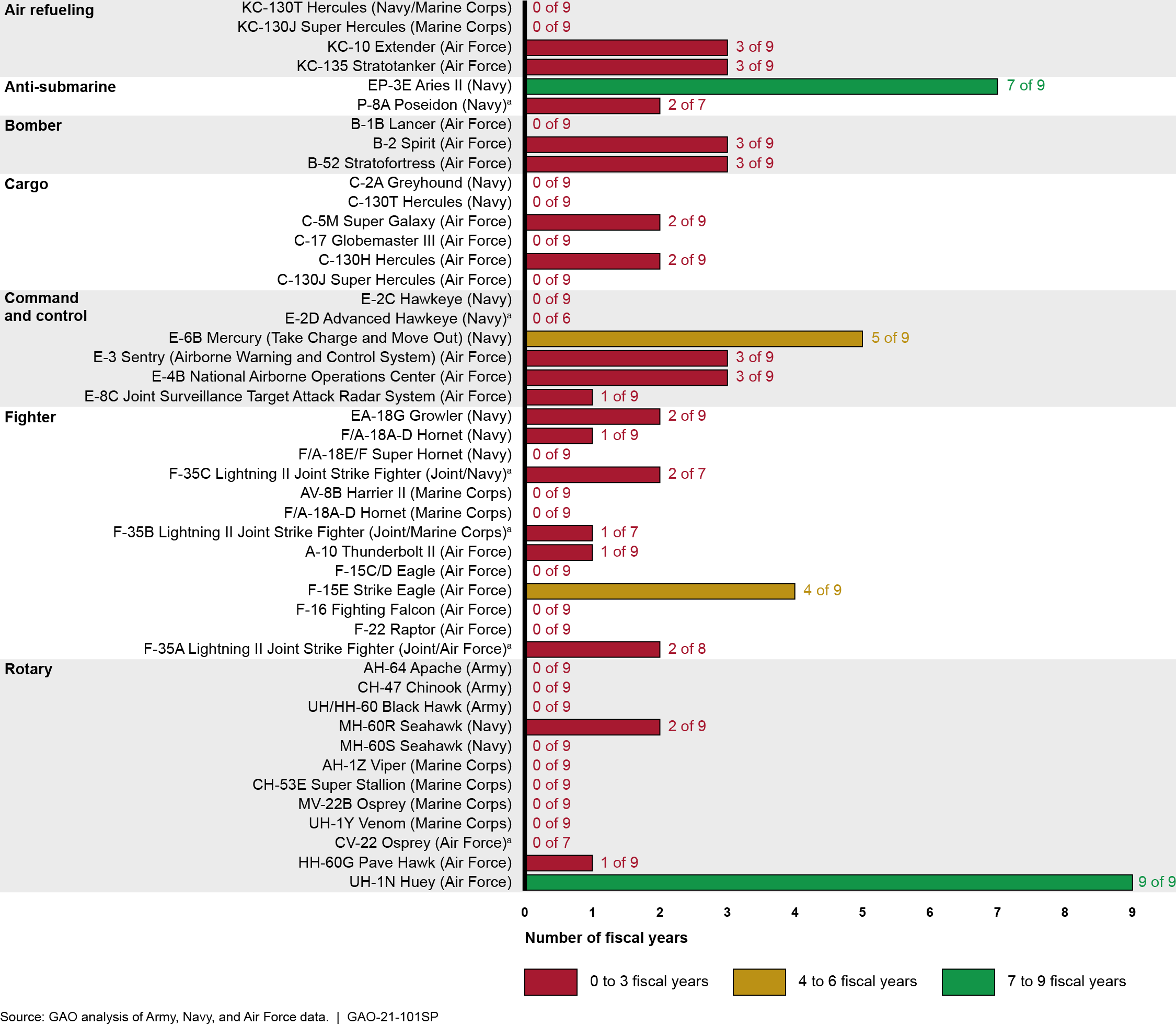 aThe military departments did not provide mission capable goals for all nine years for these aircraft.

aA service life extension refers to a modification to extend the service life of an aircraft beyond what was planned.
bDiminishing manufacturing sources refers to a loss or impending loss of manufacturers or suppliers of items.
cObsolescence refers to a lack of availability of a part due to its lack of usefulness or its no longer being current or available for production.

Operating and Support Costs for Selected Department of Defense Aircraft

Operating and support (O&S) costs, such as the costs of maintenance and supply support, totaled over $49 billion in fiscal year 2018 for the aircraft GAO reviewed and ranged from a low of $118.03 million for the KC-130T Hercules (Navy) to a high of $4.24 billion for the KC-135 Stratotanker (Air Force). The trends in O&S costs varied by aircraft from fiscal year 2011 to 2018. For example, total O&S costs for the F/A-18E/F Super Hornet (Navy) increased $1.13 billion due in part to extensive maintenance needs. In contrast, the F-15C/D Eagle (Air Force) costs decreased by $490 million due in part to a reduction in the size of the fleet. Maintenance-specific costs for the aircraft types we examined also varied widely.

The Department of Defense (DOD) spends tens of billions of dollars annually to sustain its weapon systems in an effort to ensure that these systems are available to simultaneously support today's military operations and maintain the capability to meet future defense requirements. This report provides observations on mission capable rates and costs to operate and sustain 46 fixed- and rotary-wing aircraft in the Departments of the Army, Navy, and Air Force.

GAO was asked to report on the condition and costs of sustaining DOD's aircraft. GAO collected and analyzed data on mission capable rates and O&S costs from the Departments of the Army, Navy, and Air Force for fiscal years 2011 through 2019. GAO reviewed documentation and interviewed program office officials to identify reasons for the trends in mission capability rates and O&S costs as well as any challenges in sustaining the aircraft. This is a public version of a sensitive report issued in August 2020. Information on mission capable and aircraft availability rates were deemed to be sensitive and has been omitted from this report.