The 2020 Census includes many operations that must be successfully carried out on schedule for a cost-effective headcount of the country’s population.

We found that the Census Bureau is generally on track to meet key deadlines. For instance, it was ahead of schedule in its address canvassing field work (which helps ensure a complete and accurate list of addresses).

However, the agency plans to make changes to its hiring approach because it experienced delays in bringing staff on board for early operations. In addition, the Bureau has critical work remaining to complete IT system development and testing, as well as security assessments.

A census worker approaching a house

The 2020 Census includes many activities and operations that need to be successfully carried out on schedule for a cost-effective headcount, as well as to meet legally required deadlines. If these efforts are not completed on schedule, or fail to function as planned, they could adversely impact downstream operations, the ability to control costs, and the overall quality of the count.

1. cost and progress of key 2020 census operations critical to a cost-effective enumeration, and

2. major trends or early warnings that may require Census Bureau or congressional attention.

GAO also provides an enclosure with background information on the cost, scope, and methods of the Census.

This correspondence is the first in a series of updates meant to provide timely reporting on 2020 Census activities and operations. This update includes information from GAO's ongoing work on in-field address canvassing, hiring for early operations, information technology (IT) systems development and testing, and cybersecurity.

In recent years, GAO has identified challenges that raise serious concerns about the Census Bureau's (Bureau's) ability to conduct a cost-effective count of the nation, including new innovations, acquisition and development of IT systems, and other challenges. In 2017, these challenges led us to place the 2020 Census on GAO's High Risk list.

Early Operations for the 2020 Census Are Generally on Track 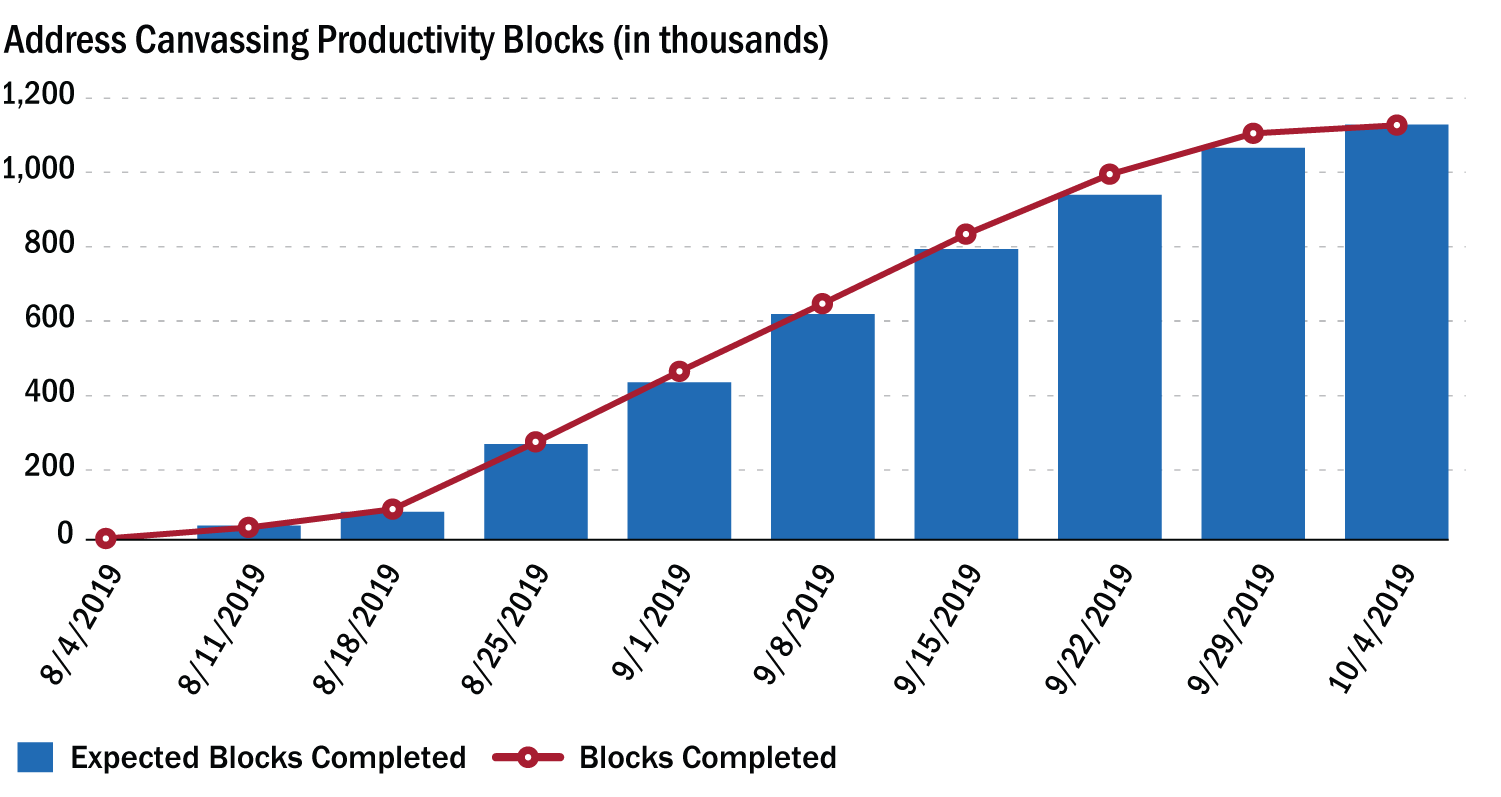 The Bureau Is Taking Actions to Address Key Identified Risks and Challenges, but Significant Work Remains

The Bureau is experiencing delays in hiring for early operations, citing delays in processing background clearances and greater than expected attrition, as shown below. The Bureau plans to address these challenges by adapting its hiring and onboarding process for peak operations in May 2020, including recruiting more applicants, expanding the number of locations for selected applicants to get fingerprinted, and providing additional training for replacement hires.

The Bureau has made progress in executing work against its development and testing schedule for its 52 information technology (IT) systems expected to be used during the 2020 Census. For example, in August 2019, the Bureau completed and deployed the systems needed for address canvassing. However, as of August 2019, the Bureau was at risk of not meeting key near-term IT system development and testing schedule milestones for 15 systems needed for six upcoming 2020 Census operational deliveries, including self-response (e.g., the ability to respond to the 2020 Census through the internet). These 15 at-risk systems add uncertainty to a highly compressed time frame for completing system development and testing work over the next 7 months.

The IT systems expected to be used to conduct the 2020 Census will also need to undergo a full security assessment and receive an approved authorization to operate from the authorizing official prior to their use. The Bureau has made significant progress in completing security assessments as a majority of the 52 systems had approved authorizations to operate as of October 2019.

Authorization to Operate Status for 52 Systems Being Used in the 2020 Census, as Reported by the Bureau in October 2019

aAccording to the Bureau’s information security policy, one system that is expected to be used during the 2020 Census primarily as a desktop tool for generating fillable forms does not require authorization to operate.