Freight Trains Are Getting Longer, and Additional Information Is Needed to Assess Their Impact

Freight trains have been getting longer—nearly 3 miles in some cases. This has raised concerns that trains may block traffic more often at road-crossings, impeding emergency responders and prompting unsafe pedestrian behavior (such as climbing through stopped trains). Braking and other operations can also be more complex for these longer trains.

We recommended that FRA broadly share its research results, and work with railroads and state and local officials on ways to solve road-crossing issues.

People making their way through a stopped train 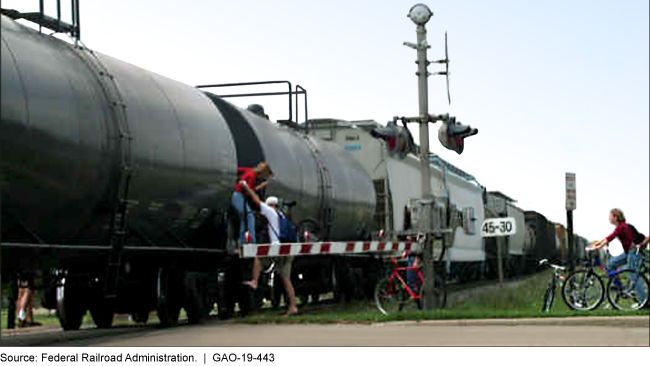 Photo showing cyclists climbing between the cars of a stopped train

Freight train length has increased in recent years, according to all seven Class I freight railroads. Data on train length are not publicly available; however data provided to GAO by two Class I railroads indicated that their average train length has increased by about 25 percent since 2008, with average lengths of 1.2 and 1.4 miles in 2017. Officials from all seven Class I railroads said they are currently operating longer than average trains on specific routes, although some said such trains are a small percentage of the trains they operate. One railroad said it runs a 3-mile-long train twice weekly. Officials identified increased efficiencies and economic benefits among the advantages of longer freight trains.

Stakeholders said that the arrangement of train cars and locomotives—known as “train makeup”—and the potential for blocking highway-railroad crossings are issues to consider to safely operate longer freight trains. To prevent derailment, stakeholders said it is important that longer trains are arranged appropriately and that crews are trained to operate them. While Class I railroads and others said that longer trains may decrease the frequency of blocked crossings, some state and local officials said these trains can prolong their duration, posing challenges for emergency responders unable to cross the tracks.

The Federal Railroad Administration (FRA) is studying the safety risks of and strategies for operating longer trains. As part of the study, FRA plans to analyze train-handling and braking capabilities under varying conditions. FRA officials said they plan to share their research results with relevant stakeholders; however, FRA currently has no documented strategy for sharing the results of its research. FRA officials are also analyzing which parts of the country are reporting frequently blocked crossings. However, FRA officials said they do not plan to use information from either of these efforts to determine whether longer freight trains might contribute to increases in blocked crossings, and the officials believe the issues are unrelated. Developing and implementing a strategy for sharing FRA's research results and identifying any potential impacts of longer freight trains on highway-railroad crossings would enable FRA and stakeholders to better determine what, if any, actions are needed to ensure the safe operation of longer freight trains.

In 2017, the U.S. freight rail system moved over 1.5-billion tons of goods. The largest freight railroads—Class Is—dominate the industry and account for more than 90 percent of its annual revenue. In recent years, railroad workers and local communities have expressed safety concerns related to longer freight trains, and recent accidents involving such trains are currently under investigation by FRA. FRA does not currently place limits on freight train length.

GAO was asked to review the safety and other impacts of longer freight trains. This report examines: (1) changes in freight train length over time, (2) safety considerations for operating longer freight trains, and (3) the extent to which FRA is assessing any safety risks. GAO reviewed relevant statutes, regulations, and federal agencies' reports and plans; analyzed available data on freight train length from railroads; and interviewed federal officials and various stakeholders, including state and local officials and first responders from five states (selected to represent different railroads and regions), and officials from the railroad industry, unions, and advocacy groups.

GAO recommends that FRA develop and implement a strategy to share the results of its study on longer trains and work with railroads to engage state and local governments to identify and reduce impacts of longer freight trains on highway-railroad crossings. FRA concurred with GAO's recommendations.

Explore our Key Issues on Transportation