What's the prognosis for the fiscal health of state and local governments across the nation?

Our annual outlook suggests the sector will have an increasingly tough time covering their bills over the next 50 years. Our model shows both revenue and spending will increase; however, spending will rise faster. Revenues may be insufficient to sustain the amount of government service currently provided.

GAO's simulations suggest that the state and local government sector will likely face an increasing difference between revenues and expenditures during the next 50 years as reflected by the operating balance--a measure of the sector's ability to cover its current expenditures out of its current receipts. While both expenditures and revenues are projected to increase as a percentage of gross domestic product (GDP), a difference between the two is projected to persist because expenditures are expected to grow faster than revenues throughout the simulation period.

State and Local Government Sector Operating Balance as a Percentage of Gross Domestic Product (GDP), 2008 through 2067 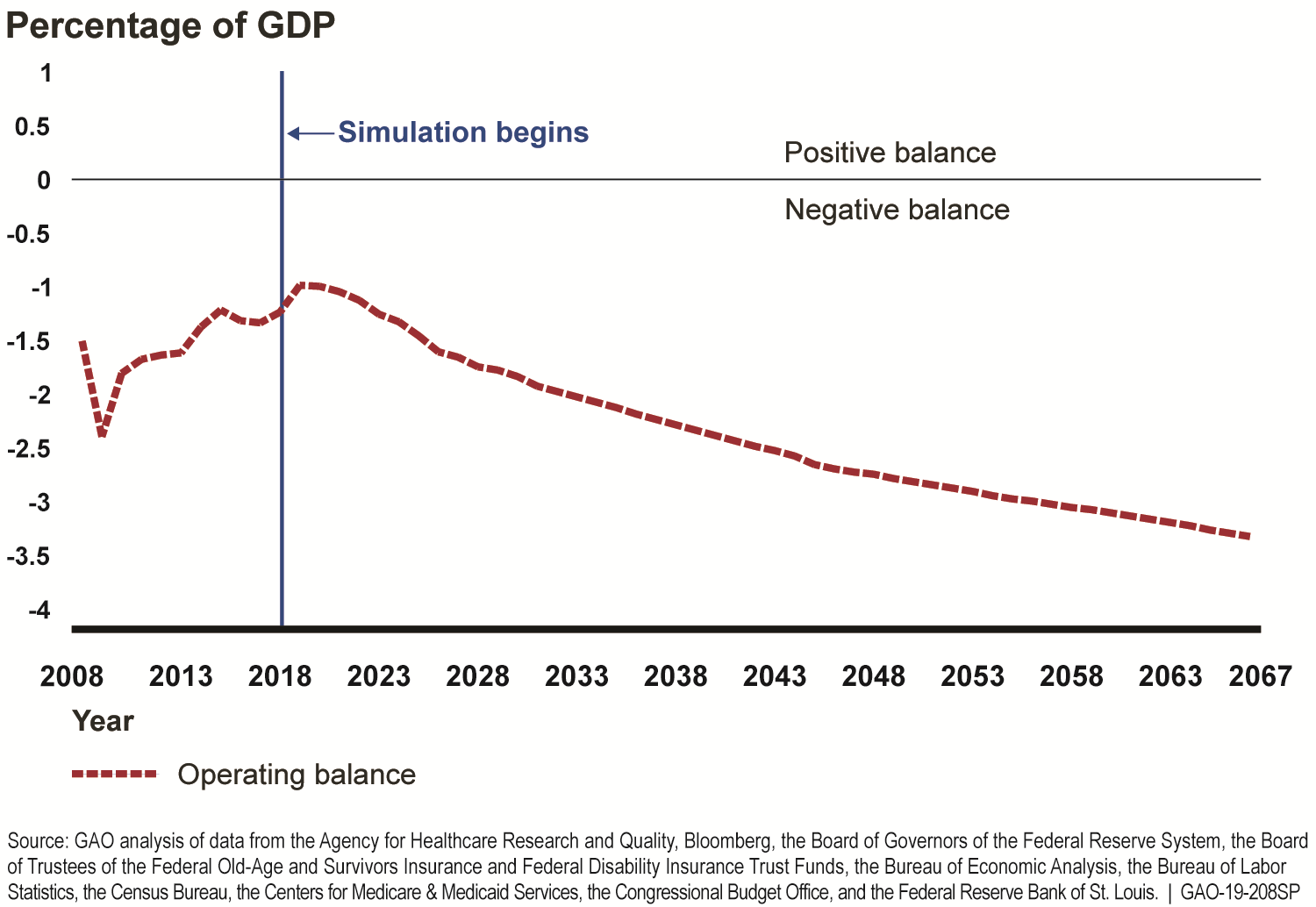 GAO's simulations also suggest that growth in the sector's overall spending is largely driven by health care expenditures--in particular, Medicaid spending and spending on health benefits for state and local government employees and retirees. These expenditures are projected to grow as a share of GDP during the simulation period. GAO's simulations also suggest that revenues from personal income taxes and federal grants to states and localities will increase during the simulation period. However, revenues will grow more slowly than expenditures such that the sector faces a declining fiscal outlook.

GAO also identified federal policy changes that could affect the state and local government sector's fiscal outlook. For example, the effects of the recently-enacted Tax Cuts and Jobs Act will likely depend on how states incorporate the Act into their state income tax rules. In addition, other factors, such as economic growth and rates of return on pension assets, could shift future fiscal outcomes for the sector.

Fiscal sustainability presents a national challenge shared by all levels of government. Since 2007, GAO has published simulations of long-term fiscal trends in the state and local government sector, which have consistently shown that the sector faces long-term fiscal pressures. While most states have requirements related to balancing their budgets, deficits can arise because the planned annual revenues are not generated at the expected rate, demand for services exceeds planned expenditures, or both, resulting in a near-term operating deficit.

GAO's model uses the Bureau of Economic Analysis's National Income and Product Accounts as the primary data source and presents the results in the aggregate for the state and local sector as a whole. The model shows the level of receipts and expenditures for the sector until 2067, based on current and historical spending and revenue patterns. In addition, the model assumes that the current set of policies in place across state and local government remains constant to show a simulated long-term outlook.