Taxpayers rely on IRS to help them comply with the tax code and file their taxes. Although IRS improved its telephone service during the 2016 tax filing season, service year-round was not as good.

We also looked at how IRS helps taxpayers who are victims of ID theft refund fraud—wherein fraudsters pose as taxpayers and file returns seeking refunds. IRS has improved aspects of service for victims, but inefficiencies continue to contribute to delays in resolving these cases.

Among other things, we recommend IRS display its service standards and performance online to let customers know what to expect, and improve service to refund fraud victims. 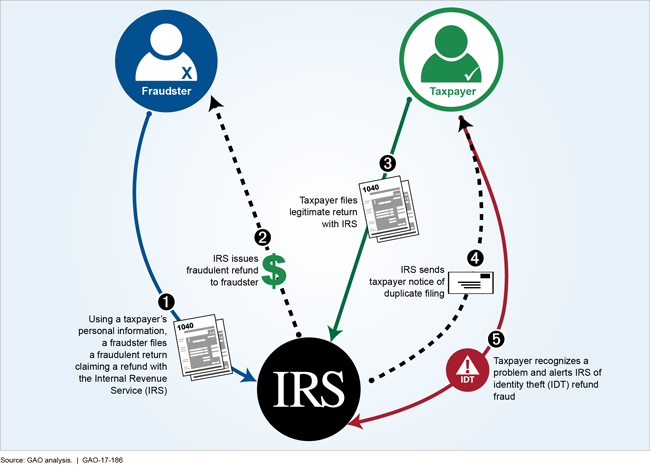 The Internal Revenue Service (IRS) provided better telephone service to callers during the 2016 filing season—generally between January and mid-April—compared to 2015. However, its performance during the full fiscal year remained low. IRS does not make this nor other types of customer service information easily available to taxpayers, such as in an online dashboard. Without easily accessible information, taxpayers are not well informed on what to expect when requesting services from IRS.

IRS has improved aspects of service for victims of identity theft (IDT) refund fraud. However, inefficiencies contribute to delays, and potentially weak internal controls may lead to the release of fraudulent refunds. In turn, this limits IRS's ability to serve taxpayers and protect federal dollars. While IRS has reduced its backlog of IDT cases and formed a team to improve its handling of these cases, GAO has identified areas for potential improvement. Specifically:

GAO was asked to review IRS's 2016 filing season. This report assesses, among other things, how well IRS provided service to taxpayers compared to its performance in prior years, and its efforts to improve service for IDT victims, including selected internal control processes.

GAO analyzed IRS documents and data for fiscal years 2011 through 2016 and reviewed 16 randomly selected IDT cases open or closed during a 10-month period in 2015 and 2016. GAO also conducted 5 discussion groups with 15 IRS assistors and 13 managers who handle IDT cases, and interviewed IRS officials and external stakeholders, such as representatives from the tax preparation industry. The results of the case studies and discussion groups are not generalizable. GAO compared IRS actions to federal standards for evaluating performance and internal control.

GAO recommends IRS display customer service standards and performance online; review its retrieval and scanning processes; improve existing data or collect new data to monitor how and why assistors release refunds before closing an IDT or duplicate return case; and revise its notices to IDT victims.

IRS disagreed with GAO's recommendation to improve data for monitoring refund releases, stating that the problem is not widespread and current processes are sufficient. GAO maintains that the data IRS uses are not sufficient to make such a determination. IRS agreed with the remaining three recommendations.