The Internal Revenue Service (IRS) uses a variety of documents to communicate its interpretation of tax laws to the public, but only considers Internal Revenue Bulletin (IRB) guidance to be authoritative. IRS information published outside of the IRB can help taxpayers understand tax laws and make informed decisions, but does not always include information clarifying the limitations of its use. IRS has detailed procedures for identifying, prioritizing, and issuing new guidance. However, it lacks procedures for documenting the decision about what type of guidance to issue.

Hierarchy of Authority for IRS Guidance and Other Information Sources 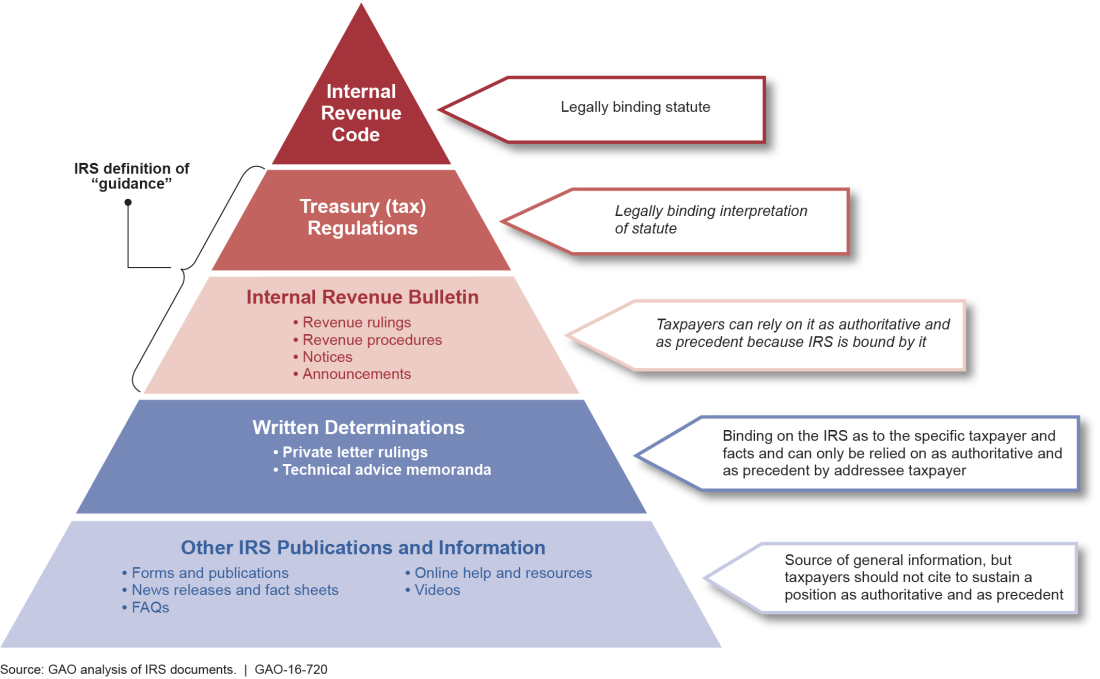 In a review of tax guidance, GAO found few instances in which the Office of Management and Budget (OMB) determined that a tax regulation was likely to have significant economic effects and would thus be subject to additional analysis. OMB's significance determinations largely result from initial assessments by the Department of Treasury (Treasury) and IRS that many administrative law or executive order requirements do not apply to most tax regulations and other guidance. Some tax regulations and other guidance are also exempt from further analysis and review under a 1983 agreement between OMB and Treasury, which was reaffirmed in 1993. This agreement has not been revisited in more than 20 years, and it is unclear whether this agreement is still relevant.

GAO also reviewed eight case files of non-regulatory IRS guidance documents published in 2015 and found that IRS did not consistently document required steps during key phases of the issuance process. Although these eight case files are non-generalizable, documenting key decisions may help IRS evaluate the risk of challenges to IRS assessments about whether tax guidance is significant enough to warrant additional OMB and congressional review.

The public relies on IRS guidance to understand complex tax laws and meet their responsibilities. GAO was asked to examine IRS guidance and rulemaking processes. This report reviews (1) how IRS communicates its interpretation of tax laws to the public and decides what type of guidance to issue; (2) what relevant authorities apply and what policies and procedures IRS uses when issuing guidance; and (3) to what extent selected IRS guidance products followed relevant authorities. GAO reviewed IRS policies and procedures for issuing guidance, conducted literature reviews, analyzed eight non-generalizable case files for compliance with relevant authorities, and interviewed agency officials and other subject matter experts.

GAO is making six recommendations, including that IRS communicate more clearly the limitations of information not published in the IRB, and that IRS develop procedures to better document the type of guidance it plans to issue and the key decisions made during the evaluations. GAO also recommends that Treasury and OMB reevaluate their long-standing agreement to exempt some tax guidance and regulations from OMB oversight. IRS and Treasury agreed with all of GAO's recommendations, and OMB neither agreed nor disagreed.