DOD has met most but not all legislative requirements for the MODA program. As required by the National Defense Authorization Act (NDAA) for Fiscal Year 2012, DOD obtained concurrence on its proposed deployments from the Department of State (State). DOD's most recent annual report to Congress included 4 of the 6 required elements, but did not include information on the cost or duration of each Global MODA deployment, which could help Congress assess the value of the program in relation to other capacity-building efforts (see figure). Additionally, DOD has not provided information on the program's performance, such as linking actual performance to goals. Although DOD is not required by law to include this information, GAO has previously reported that such information can be useful to decision makers. Finally, DOD has not updated the policy for the program as required in the NDAA for Fiscal Year 2014. 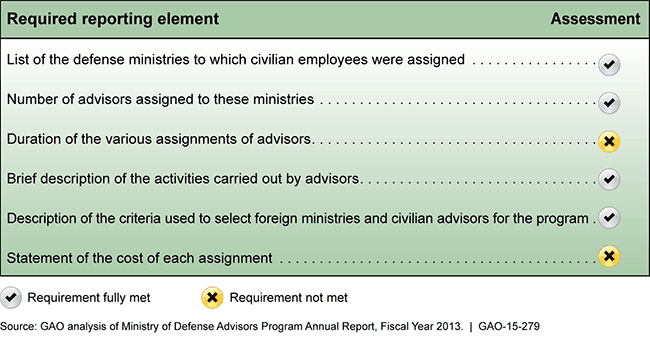 In 2012, Congress authorized DOD to create a program to assign civilian DOD employees as advisors to foreign ministries of defense. DOD created the Global MODA program, an expansion of a program started in Afghanistan in 2010, which partners DOD civilian experts with foreign defense and security officials to build core competencies in key areas such as strategy and policy, human resources management, acquisition and logistics, and financial management. The NDAA, as amended, required that DOD (1) obtain concurrence on the program from the Secretary of State; (2) provide an annual report to Congress including 6 elements on the status of the program; and (3) update the policy for the program. Congress also required GAO to report on the effectiveness of the program.

GAO assessed (1) DOD's progress in expanding MODA globally and (2) the extent to which DOD met NDAA requirements. GAO reviewed MODA program plans, reports, and other documents and interviewed DOD and State officials in Washington, D.C., as well as in Kosovo and Montenegro—the locations to which the first 2 advisors were deployed.

GAO recommends that DOD (1) include all required information in its annual reports to Congress; (2) consider providing Congress with additional information on the program's performance; and (3) develop a time frame for updating the policy for the MODA program. DOD concurred with these recommendations.