Are you one of the millions of passengers flying over the holidays? Do you know your rights if your flight is cancelled or overbooked, or if your checked bag doesn’t arrive when you do?

Today’s WatchBlog explores airline consumer protection issues and the Department of Transportation’s actions to protect passengers. Listen to our podcast and read on for more.

Airlines’ treatment of passengers has come under scrutiny following several high-profile incidents, including the forcible removal of a passenger from an overbooked flight. Despite such incidents, Transportation’s data on denied boardings and mishandled baggage suggests that service has generally improved since 2008, particularly since 2014. 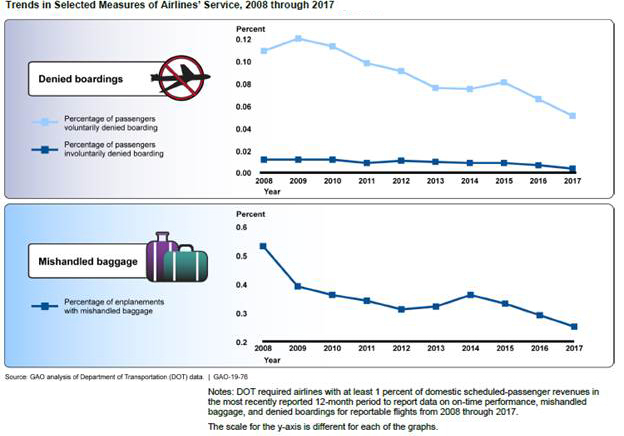 How does the Department of Transportation protect consumers?

Transportation can issue and enforce consumer protection requirements. For example, Transportation recently published new rules or expanded existing rules by restricting long ground delays, increasing compensation for passengers who are denied boarding, and requiring certain airlines to post information on their websites about their fees and on-time performance.

To help airlines understand and comply with these and other consumer protection requirements, Transportation conducts 5 key activities:

Transportation also has an aviation consumer protection website, which provides tips for avoiding common travel problems and information on topics like unaccompanied minors and family seating.

While Transportation has taken steps to protect airline passengers, we identified a number of additional actions it can take to ensure airlines’ compliance with consumer protections and to educate consumers. These include developing performance measures for compliance activities, improving procedures to more consistently categorize complaints, and seeking feedback directly from consumers about what they know about their rights.

To learn more, check out our full report