Over the past two decades, we’ve issued annual “Quick Looks” at the Department of Defense’s largest and most expensive acquisition programs. Our work continued this year with a review of DOD’s 86 major weapons programs, which totaled more than $1.66 trillion. 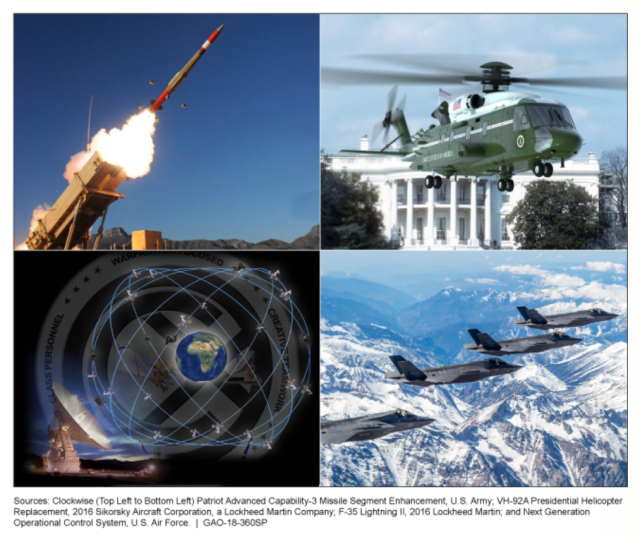 That’s a big portfolio—and a significant investment of taxpayer dollars. If you’ve been following our work here at GAO, you know that, historically, major acquisition programs at DOD have been affected by schedule delays, cost growth, and other inefficiencies. Reforms set into motion more than 8 years ago aimed to curtail many of these issues—and have succeeded to some degree. In this year’s Quick Look, we probed yet again at how these reforms are continuing to shape DOD’s successes, failures, and future.

Today’s WatchBlog dives into our 16th DOD Quick Look. Listen to our podcast, and then read on for more.

DOD’s current portfolio is bigger and more expensive than it was last year. Despite this growth, newer programs—those initiated since the reforms we mentioned earlier—performed better cost-wise in 2017. Still, it is too early to say if this trend will continue. A lot depends on how these programs fare once they enter production when, as illustrated below, cost growth is most likely to spike.

Programs that strategically used competition this year, including competitive award of contracts, reported decreases in total acquisition cost estimates. These programs have implemented key reforms aimed at leveraging competition to promote a more affordable and efficient acquisition process. Of the programs that awarded development, test, or production contracts this year, 61 percent did so competitively.

As we’ve reported in prior years, DOD programs are still not fully implementing knowledge-based acquisition practices. These steps ensure technologies are mature, designs are stable, and production processes are in control, which help to reduce a program’s risk of cost growth, schedule overruns, and performance shortfalls. In fact, most of the 45 current programs that proceeded into system development, through critical design reviews, and into production this year did so without completing key knowledge-based practices. And only one of the 12 future programs gearing up to enter DOD’s portfolio plan to fully meet these practices when they start system development. 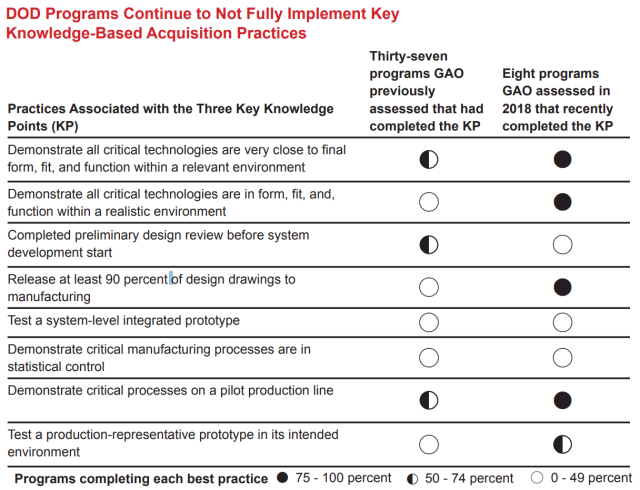 We’ll be sure to track how this lack of knowledge affects DOD’s programs in the years to come. However, as this year’s Quick Look indicates, DOD remains at risk of undesirable cost and schedule outcomes, despite all of the department’s positive strides.

So, the reforms are working for the time being. Though it is still too early to tell if the changes we saw this year will continue in the long run.