Education programs in science, technology, engineering, and mathematics (STEM) play an important role in preparing students for careers in STEM fields. Over the last decade, the federal government has taken important steps toward diversifying the pipeline of STEM talent in the United States, primarily by supporting STEM education opportunities for historically underrepresented groups in these fields. In 2016, the federal government spent $2.9 billion on 163 STEM education programs across all grade levels—from preschool to graduate school.

So, are these programs broadening access to STEM fields?

The Committee on STEM Education is made up of multiple federal agencies that support STEM education programs. In its 2013 strategic plan, the Committee identified broadening the participation of underrepresented groups as one of its national goals.

However, we found the Committee didn’t report on the participation rates of underrepresented groups as required by law.  As a result, there’s no way to know if participation by these groups has increased or not.  Further, we don’t know which agencies or programs are succeeding in diversifying the pipeline and which are falling short. Likewise, we don’t know if progress is being made towards the Committee’s goal of broadening participation. 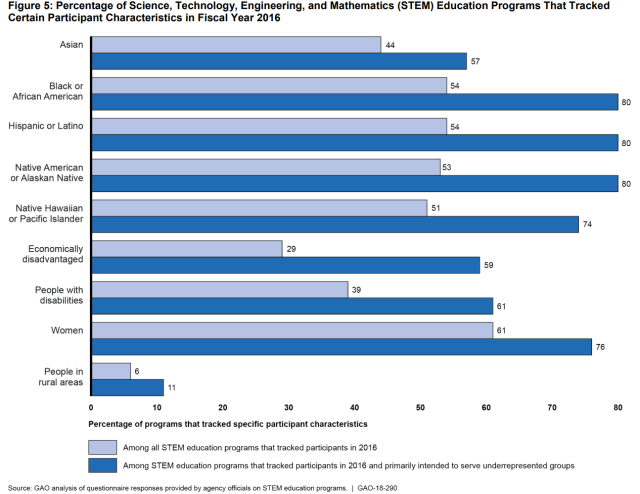 We recommended that the Committee take action to fulfill its requirement to report participation rates of underrepresented groups. We also noted the Committee should report on participation rates of women, underrepresented minorities, and persons from rural areas, and develop strategies to help agencies overcome some of the challenges they may face collecting the data.

The Committee noted it plans to examine factors that inhibit the reporting of participation data; gaining insight on the challenges agencies face is a first step.

To learn more, read our report.