More than 90% of military equipment, supplies, and fuel travels by sea. When the military deploys anywhere, the demand for naval transportation grows.

Additional shipping capacity must be ready to assist in any major event, ranging from a natural disaster to war. This requires both active and reserve ships. Today, the WatchBlog looks at our recent report on the surge sealift fleet of the Navy’s Military Sealift Command and the Department of Transportation’s Maritime Administration—61 reserve ships that provide millions of square feet of cargo capacity to transport equipment and supplies around the world.

Is the fleet ready for action?

Earlier this year, we reported that the surge sealift fleet’s readiness is declining. Specifically, more mission critical equipment (such as engines and diesel generators) is breaking. Also, regular maintenance is taking longer than planned.

We also found that the fleet is aging. On average, the ships are nearly 40 years old, with some ships well over 50. Many of them are expected to be retired over the next 10 years. In fact, our analysis shows that the surge sealift fleet will lose over 25% of its cargo capacity by 2027 (as shown in the figure). 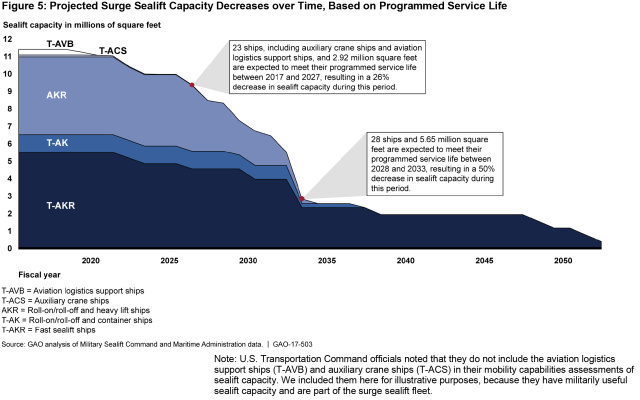 Last year, the Deputy Secretary of Defense directed the Navy to develop a plan for recapitalizing (rebuilding or replacing) the surge sealift fleet’s ships. The Navy’s plan includes a three-pronged approach:

We found that the Navy’s recapitalization strategy is missing a few elements that we believe are necessary. For example, the Navy’s plan does not include a needs assessment with a complete inventory of ships and their condition. Without such an inventory, how does the Navy know exactly what it really needs?

The Navy’s strategy also does not prioritize projects by comparing the costs and benefits of proposed investments. This information can help ensure that the Navy is pursuing the most cost-effective projects as it replaces this crucial reserve fleet. 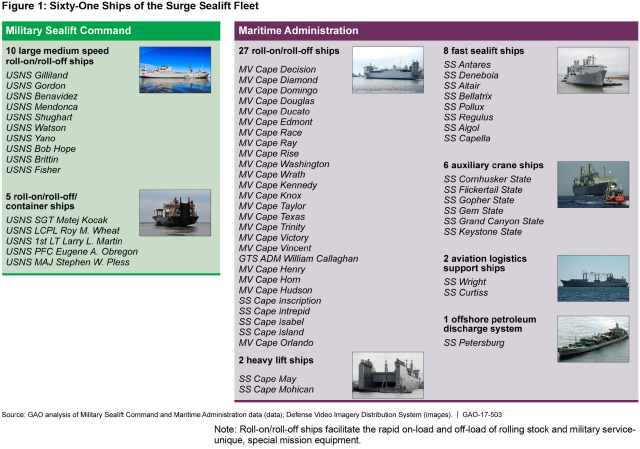 We recommended that the Navy incorporate these and other leading practices for capital investment planning in a comprehensive long-term recapitalization plan, and it agreed.

You can read more about these ships in our report.