After 6 years of declining deficits, the federal deficit increased to $587 billion in 2016 and U.S. debt held by the public stood at about $14.2 trillion at the end of 2016. These figures are only expected to grow.

To help policymakers grapple with this problem, we regularly prepare long-term fiscal simulations to show how the federal debt could grow or shrink based on different policy choices.

Today, we released the first of an annual overview report on the federal government’s fiscal condition and long-term fiscal health, and updated our fiscal outlook webpage. Read on for some of the highlights, our latest video explaining the issue, and some solutions to this growing problem.

There is a structural imbalance between federal revenue and spending under current law. This leads to ever rising debt as a share of the economy—this is unsustainable.

Congress and the incoming administration will need to consider the whole range of federal activities and spending—entitlement and other mandatory programs, discretionary spending, and revenues.  They will also need to make some tough policy choices in order to put the federal government on a path of long-term fiscal sustainability.

The issue is complicated, and the solutions won’t be easy, but our video explains some of the key facts, considerations, and potential solutions:

What are the drivers?

On the spending side, the two key drivers are mandatory spending programs, including Social Security, Medicare and Medicaid, and the interest the federal government pays on the national debt. As these grow they put pressure on other areas of the government and could limit the ability to respond to unforeseen events. 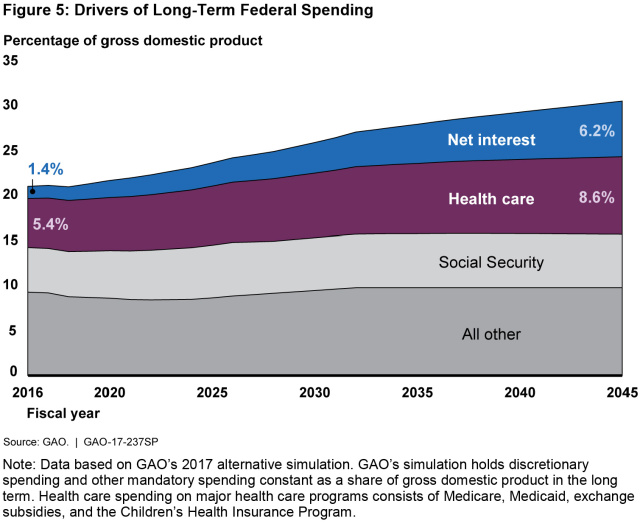 Although any long-term changes in spending and revenue will require legislation, federal agencies can help ensure a sustainable fiscal future. We identified four key actions for them:

Check out our updated fiscal outlook page for the underlying assumptions, data, key reports, and more.