Female genital mutilation is a form of gender-based violence that has affected over 200 million women and girls worldwide. The practice involves partial or total removal of the external female genitalia, or other harm to the female genital organs for non-medical reasons, and it can cause a number of short- and long-term health consequences.

Today we look at what’s being done to address FGM, both at home and abroad.

Where is it practiced?

FGM is prevalent in 30 countries, according to the United Nations Children’s Fund. (It also occurs elsewhere, such as Colombia and India, but there are no estimates of prevalence for those countries.) 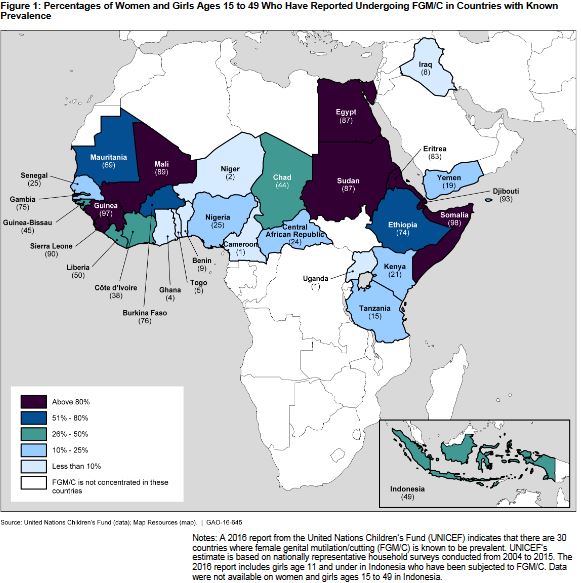 Often illegal, but difficult to enforce

The United States and many other countries have enacted laws against FGM. In the United States, it is illegal to perform FGM on a minor. It is also illegal to transport a girl under 18 years of age abroad for the purpose of performing FGM—a practice known as “vacation cutting.”

Yet, we found few U.S. investigations and prosecutions related to FGM. According to local law enforcement and child protection officials, immigrant communities may underreport FGM due to

The United States has, so far, provided limited assistance to stop this harmful practice in other countries. We found 2 active U.S. programs dedicated solely to addressing FGM: one in Kenya and the other in Guinea.

However, the State Department intends to contribute to a UN program that supports community efforts in 17 African countries to abandon FGM as a rite of passage.

Women and girls at risk of (or who have been subjected to) FGM in their home country may also seek U.S. protection. Before they arrive in the United States, the State Department provides education on FGM to refugees and some visa recipients in a fact sheet (you can see a copy of it in our full report).

But the fact sheet may not get into the hands of the people who need it. For example, State doesn’t give it to visa recipients who are nationals of countries where FGM is common, but who are outside of their home countries when they apply for visas.

To learn more about combatting FGM, including the kinds of education and outreach the U.S. government provides, check out our reports on U.S. assistance abroad and at home.