The F-35 is the Department of Defense’s largest and most expensive weapon system ever. This fleet of aircraft is the most technologically advanced in history, possessing state-of-the-art warfighting capabilities, and is estimated to cost more than $1.3 trillion over the program’s 56-year life cycle. Is DOD ready for it?

Today’s WatchBlog discusses DOD problems assessing the affordability of the F-35 and the risks related to the F-35’s Autonomic Logistics Information System—the “brains” of the aircraft.

A brief history of the F-35

DOD plans to acquire more than 2,400 F-35 aircraft. The F-35, also known as the Joint Strike Fighter, is being built and customized for three military services—the Marines, the Air Force, and the Navy. Last July, the Marines declared initial operational capability of the F-35, meaning the aircraft is ready for use in certain missions. Over the next few years, the Air Force and Navy are also planning to meet this milestone. 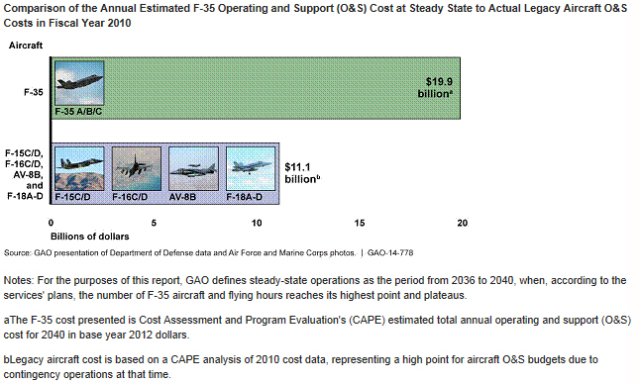 DOD has estimated that it will cost around $1 trillion to operate and sustain the F-35s over their life cycle, but the department still can't determine if it can realistically afford the F-35 program. That’s because the services using the aircraft—the Air Force, Navy, or Marine Corps—don’t know if they have room in their individual budgets for it.

Moreover, DOD may have underestimated certain elements that affect operating costs, such as how much fuel the aircraft will need, which could add billions of dollars to the cost of the program over its life cycle.

Keeping the “brains” in shape

The F-35 has been called a flying computer, given its advanced technology. In 2016, we examined the F-35’s Autonomic Logistics Information System—the “brains” of the aircraft.

According to DOD, most of the applications within the Autonomic Logistics Information System currently have problems.

In addition, the Autonomic Logistics Information System requires a connection to a server, something that may not be available everywhere the F-35 could be deployed. Even in places where a connection is available, loss of electricity from weather or damage could take the F-35’s system offline.

In addition, F-35s route all their data through a single system, with no backup. If that system fails, the entire F-35 fleet could go offline.

We made a number of recommendations to ensure that the risks associated with the Autonomic Logistics Information System are addressed prior to 2019, when DOD expects to hit the full rate of production of the F-35. Weapons of mass destruction have the potential to kill thousands of people in a single attack. These...
Read the post

More counterfeit goods, drugs, and other illegal or prohibited items may be entering the United...
Read the post

Tens of thousands of people apply for asylum in the United States each year. Asylum officers review...
Read the post

Podcast on Oversight of DHS Acquisitions

In fiscal year 2014, the Department of Homeland Security planned to spend about $10 billion to...