Skip to main content
About 15% of older adults have dementia. Some of them are prescribed antipsychotic drugs to help treat the symptoms of the disease. However, the Food and Drug Administration has not approved those drugs to treat dementia. May is Older Americans Month as well as Mental Health Awareness Month. Today’s WatchBlog will touch on both issues as we examine antipsychotic drugs for older adults living in nursing homes. Dementia and Drugs Dementia is not a specific illness, but is commonly associated with memory decline. Other symptoms include mood changes, loss of communication, and sometimes agitation or aggression. To help manage symptoms, doctors frequently prescribe antipsychotic drugs. This is an “off-label” use, as the drugs are FDA-approved to treat mental illnesses such as bipolar disorder and schizophrenia, but not dementia. While clinical guidelines for treating dementia can include antipsychotic drugs, the guidelines also suggest prescribing those drugs only after Why? Antipsychotic drugs can be risky in older patients. Studies have found that antipsychotic drugs can cause falls and other problems in older adults with dementia, and may even increase the risk of death. Listen to Katherine Iritani, a director in our Health Care team, explain more about these drugs and how they’re used to treat dementia:   Nursing homes Caring for someone with dementia can be physically and mentally demanding, often leading families to place older people with dementia in nursing homes. In fact, one study found that people with dementia accounted for nearly 40% of U.S. nursing home residents. 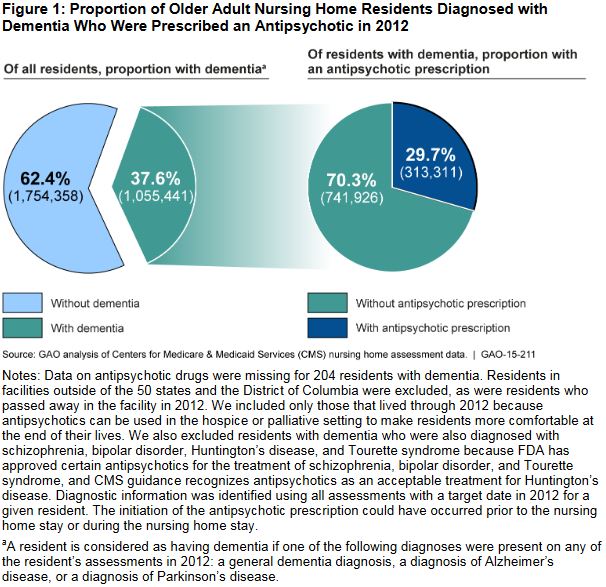 While people in nursing homes may have more severe dementia, that’s not necessarily why they are receiving more antipsychotics. Reasons for prescribing antipsychotics for dementia patients included distress or violence as a result of dementia. But experts also told us that a nursing home’s culture may encourage the use of antipsychotic drugs, and that some nursing home staff may not be aware of the risk of the drugs or have nondrug alternatives they can try. And all of these drugs came with a cost to the federal government—roughly $363 million through the Medicare Part D program in 2012. Sounding the alarm To help reduce antipsychotic use in nursing homes, several federal agencies within the Department of Health and Human Services are taking action, such as by However, these agencies have done little to address the problem outside of nursing home settings. To help reduce the overall use of antipsychotic drugs among older adults with dementia—and save on spending for these drugs when not necessary—we recommended that the department expand its outreach and educational efforts to older adults who do not live in nursing homes. For more details on our recommendation, the types of drugs being prescribed to treat dementia, and more on the reasons behind why people with dementia are prescribed antipsychotics, check out our full report.
Read the post Advancements in science and technology are shaping our lives every day. GAO helps Congress to...
Read the post Women have made significant strides in the fight for representation and equal treatment in the...