E-cigarettes have rapidly become more popular since they first appeared on the U.S. market about 10 years ago. Just last week, the Food and Drug Administration issued a rule to regulate e-cigarettes as tobacco products.

This follows recent e-cigarette legislation requiring liquid nicotine packaging to be child-resistant and meet other poison prevention standards. As the legal landscape surrounding these relatively new products has changed, the WatchBlog has been keeping an eye on e-cigarettes.

In the new final rule released on May 5, 2016, FDA extended its tobacco product regulation authority to cover e-cigarettes and other products that meet the statutory definition of “tobacco product”—such as cigars, pipe tobacco, hookah, and nicotine gels.

According to FDA, the rule prohibits the sale of “covered tobacco products,” including e-cigarettes, to individuals under the age of 18 and requires health warning labels on packages and in advertisements. Moreover, FDA stated that going forward it will be able to:

According to FDA’s new rule, neither the action FDA has taken under the rule nor any other FDA regulations directly affect the taxation of any tobacco product. At present, the Internal Revenue Code of the United States, which sets federal tax rates, does not specifically define or list a tax rate for e-cigarettes.

And while e-cigarette use is increasing, federal tax revenue from traditional cigarettes has been declining. 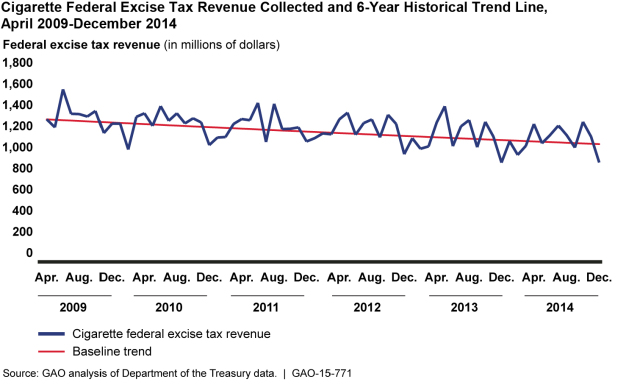 This graph raises the question of whether e-cigarette use contributed to the decline, but from the data available in 2015 we couldn’t measure any effect of e-cigarettes on the traditional cigarette market. Reasons for that include:

To help defray the costs of expanding oversight to additional tobacco products, FDA may propose another new rule to impose user fees on e-cigarette manufactures and importers. If it does, FDA may start collecting data on quantities of e-cigarettes sold on the U.S. market to calculate the fees. Over the last decade, the use of traditional cigarettes in the United States has declined, while the...