This is a time of year when people may take time off to spend spring break with family or visit the cherry blossoms in the nation’s capital. But not all time off—or, in fed speak, “leave”—is for a vacation, or even a trip to the doctor. And we found that some leave can last much longer than expected. In today’s WatchBlog, we explain and explore federal administrative leave.

What is administrative leave?

Administrative leave is an excused absence from work without loss of pay or time for vacation or sick leave. In 2014, we found multiple reasons why federal agencies authorize paid administrative leave, including 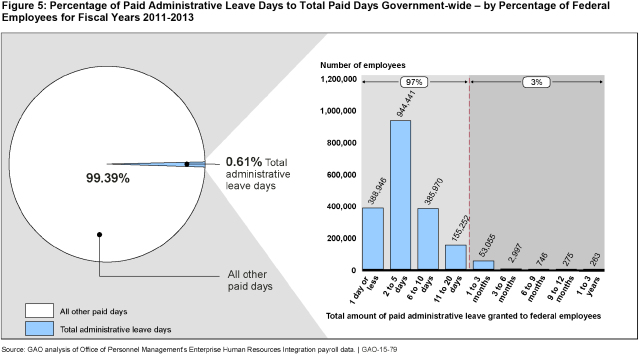 We took a closer look and found that issues related to personnel matters were the primary reason for extended administrative leave—these can include time spent investigating alleged misconduct, criminal matters, or security concerns.

DHS had placed 116 employees on administrative leave for personnel matters for 1 year or more between fiscal years 2011 and 2015. More than half of those employees ultimately left or were fired from the department. The cost? Nearly $20 million in paid salaries for this period.

One reason some of these personnel matters took so long to resolve was the length of the investigations. In one particularly long and complex misconduct investigation at DHS, an employee was on administrative leave for over 2 years while investigators conducted more than 50 interviews abroad.

Ensuring leave is “proper and limited”

While due process and fairness are important for federal employees on administrative leave, this leave is also a cost to the taxpayer and needs to be tightly managed.

DHS recently enacted a department-wide policy on administrative leave. Before this policy, each DHS component—such as FEMA or U.S. Customs and Border Protection—had its own way of managing such leave. The new policy aims for proper and limited use of administrative leave. For example, the head of each DHS component must approve leave that lasts more than 30 consecutive days for anyone under his or her purview.

To ensure that DHS’s administrative policy is working as intended, we recommended that DHS evaluate it and share the results. News headlines during the pandemic have highlighted the disproportionate effect of COVID-19 across...
Read the post Note: This blog has been updated. The original version showed death rates as a percentage rather...
Read the post When Vice President Kamala Harris was sworn in January 20, she became the first candidate elected to...