In today’s military, the wounds of war often lurk beneath the surface. Traumatic brain injury and post-traumatic stress disorder are increasingly common among servicemembers returning from Iraq and Afghanistan. And the road to recovery can be a long one.

Rest and prescription drugs are the usual treatments for TBI and PTSD. But another treatment, hyperbaric oxygen therapy, is being studied to determine whether it can improve these conditions by healing the brain instead of just treating the symptoms. We recently reviewed studies of this therapy, and, for Brain Injury Awareness Month, today’s WatchBlog shares what we found.

TBI is caused by external force, like a nearby explosion, physically injuring the brain. Concussions are a mild form of TBI. The symptoms—confusion, disorientation, and memory loss—may clear up in a matter of hours or days. But TBI can be more severe, causing a wide range of long-term physical, mental, and emotional problems.

PTSD is a mental health disorder that can develop after a traumatic event like assault, another's death, or war. Insomnia, anxiety, nightmares, and difficulty coping with day-to-day life and maintaining relationships typically affect PTSD sufferers.

Though these illnesses are different, studies show that more than a third of servicemembers with mild TBI also have PTSD. 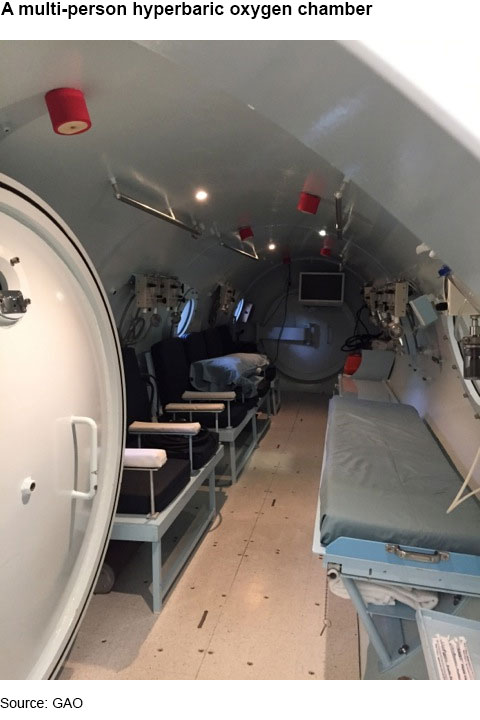 The air we breathe is about 20% oxygen. In hyperbaric oxygen therapy, also known as HBO2 therapy, patients breathe nearly pure oxygen while inside a sealed, high-pressure chamber. This raises oxygen levels in the blood and tissue, which is meant to enhance the body’s natural healing process.

This therapy is well-established for treating embolisms, carbon monoxide poisoning, and decompression sickness from scuba diving accidents. But while the FDA has approved the therapy for the treatment of these conditions, its use for treating TBI and PTSD has not yet cleared the FDA’s approval process.

The 32 studies we reviewed indicate that HBO2 isn’t an effective treatment for TBI or PTSD, or that more research is needed.

Most of the studies focused on TBI, with only a few concluding that HBO2 was an effective treatment. And those that did were less rigorous, lacking controls featured in other studies like randomly assigning participants, double-blinding (neither the researcher nor the participant knew which treatment was given), and including a “sham” group given a placebo.

The Department of Veterans Affairs has also reviewed studies on HBO2 therapy and likewise concluded that no well-designed studies showed that the therapy was effective for treating TBI. In July 2014, after its own literature review, the Department of Defense concluded that more well-designed research should be considered to resolve questions about the effectiveness of HBO2 therapy in treating mild TBI.

Our full report lists all the studies we reviewed and details their designs and results.