Secure systems to secure the nation

Reported cybersecurity incidents at federal agencies grew more than twelvefold from 2006 to 2014. 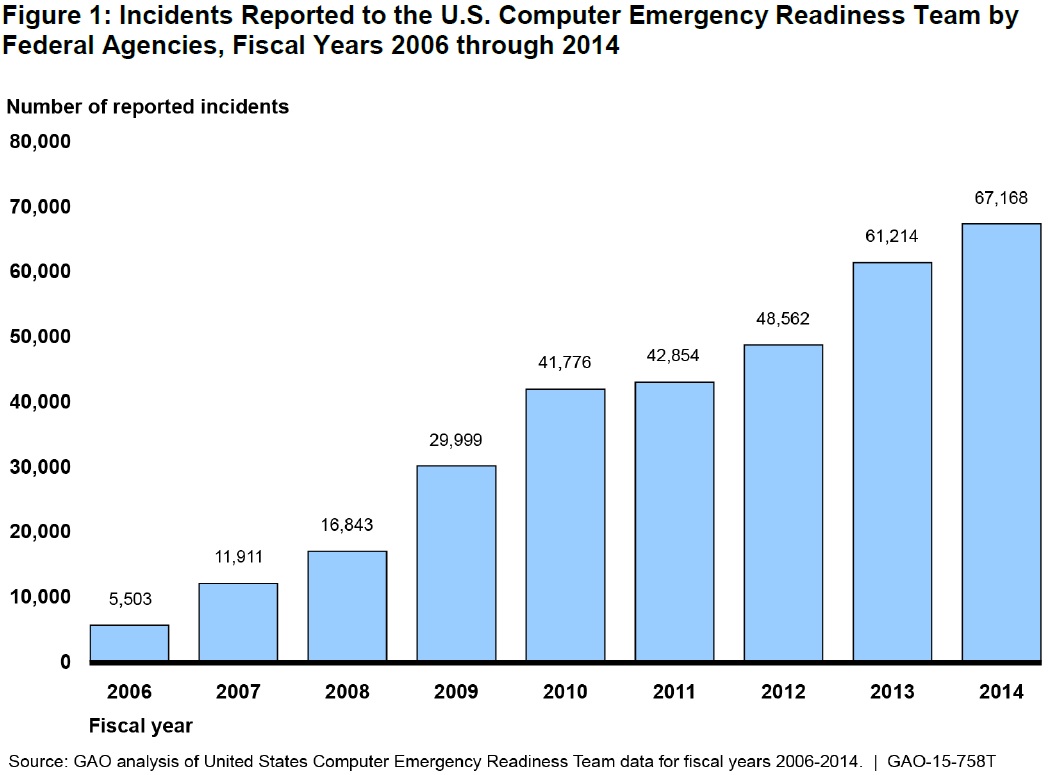 These incidents can result in the release of sensitive and personal information, theft of intellectual property, destruction or disruption of critical systems, and damage to economic and national security.

Agencies are supposed to protect themselves against threats from hackers, terrorists, insiders, and other nations. To secure federal IT systems, agencies should

But agencies have struggled to implement these security measures. In fact, we found that most of the 24 major federal agencies had persistent weaknesses in 3 or more of these areas. These weaknesses could expose confidential information or even take down entire systems.

Despite the vast amount of information they collect, agencies don’t always have policies and procedures to assess risks and protect the personal information of citizens and residents.

For example, in 2014 we reported that the Centers for Medicare & Medicaid Services hadn’t fully assessed privacy risks related to systems supporting Healthcare.gov, the federal health insurance marketplace. Until these and other weaknesses are addressed, Healthcare.gov and its related systems face unnecessary risks.

However, federal agencies haven’t always been on top of this. For instance, we recently found that the FAA had significant weaknesses in securing air traffic control systems. If these weaknesses were exploited, the impact on air safety could be devastating. Listen to Greg Wilshusen, a director in our Information Technology team, explain:

The proliferation of cyber threats makes cybersecurity a daunting challenge for the federal government. To help meet these challenges, we have made hundreds of recommendations aimed at strengthening agencies’ cybersecurity. It will take coordinated effort across the government, with strong strategic direction from the White House and effective oversight, to make sure that federal agencies are taking all the necessary steps to protect our nation’s systems and information. In 2019, a software developer in Chicago submitted bank statements from a fake investor to obtain a...
Read the post Many of the more than 30 million small businesses in the U.S. experienced decreased revenue or...