Skip to main content
Under the Patient Protection and Affordable Care Act, marketplace websites were supposed to let people seamlessly enroll in private health insurance plans and apply for premium subsidies. But these state-based websites and their underlying and related systems were far from seamless when they went live in October 2013. Many websites froze, crashed, or had other technical problems as people were in the middle of filling out applications. These problems delayed enrollment for thousands and received widespread media attention. So just what went wrong? Our recent report on state marketplaces, the subject of today’s WatchBlog, has the answers and some recommended improvements. You can also listen to Valerie Melvin, a director in our Information Technology team, discuss the report.

State-based marketplaces vs. HealthCare.gov First, the setup. The Patient Protection and Affordable Care Act allowed states to set up their own health insurance marketplaces or to use a marketplace established by the federal government. Depending on what individual states decided, residents could apply for coverage through a state-created web portal, the federal HealthCare.gov site, or some combination of the two. 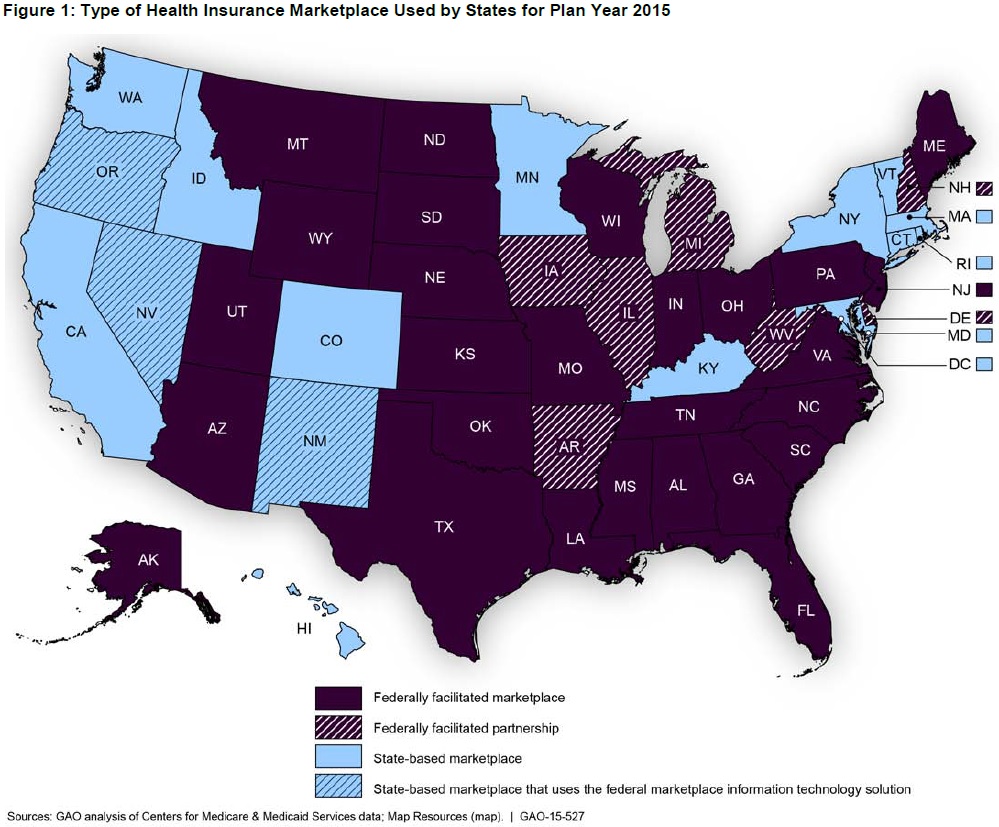 Seventeen states opted for state-based marketplaces, with 14 establishing their own IT systems (light blue on the map) and 3 using the federal IT solution (light blue with lines). These 17 states accounted for nearly $1.37 billion of the $1.45 billion in federal grant funds for IT projects spent by all 50 states and the District of Columbia from September 2010 through March 2015. More was spent from federal-state Medicare funds, but the total is unclear because few states tracked the amount that went specifically to marketplace projects. Struggling state systems Now, the problems. All states had some trouble setting up their marketplaces regardless of whether they were creating their own or using the federal marketplace. For example, almost every state reported difficulties meeting compressed timeframes and overcoming project management challenges. But some states that established their own marketplaces had additional issues. For example, they were more likely to have trouble developing interfaces that worked with insurers or that could determine applicants’ eligibility. As of February 2015, some functions of the state-based systems remained incomplete and required manual workarounds. According to some states, part of the problem was also with the Centers for Medicare & Medicaid Services. For example, CMS didn’t have a comprehensive communication plan, but instead scattered guidance across various websites and documents, some of which were left in draft form for years. The resulting uncertainty may have left some stakeholders and state officials not fully aware of their responsibilities. CMS also reportedly failed to involve all relevant senior officials in key marketplace funding decisions, which may have decreased accountability. Moreover, CMS’s reviews of state systems failed to demonstrate that they were ready to launch in some cases. For example, in one round of testing just months before systems were to go live, CMS conditionally passed one state’s system even though it had over 100 outstanding high-priority defects and almost 500 unresolved defects. Tech support Despite all this, states are steadily improving their marketplaces. To help them along, we made 3 recommendations for CMS to improve communication, stakeholder involvement, and system testing.
Read the post