Each year, we report on the National Aeronautics and Space Administration’s (NASA) major projects. Last week, we issued our latest “Quick Look” report, with updates on projects that are expected to cost at least $250 million. This year, 16 projects met that threshold, and among the 12 with firm budgets, the total expected cost is at almost $19 billion. Read on for our latest findings.

Compared to prior years, NASA’s major projects are close to being on target for cost and schedule. The total growth in cost of its 2015 portfolio was 2.4 percent, a smaller increase than last year, and delays averaged 3 months from the original timeframes. In addition, 5 projects did not change from their newly established budgets and timelines.

However, the good news does not extend to the James Webb Space Telescope. NASA has delayed that project’s launch by 52 months, and it is currently $3.8 billion over budget, an amount that has significantly increased the cost of the whole portfolio, as shown below. 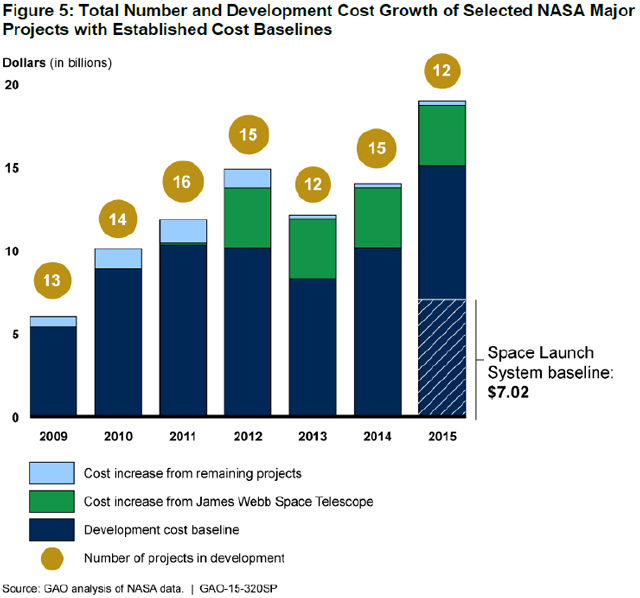 Any cost or schedule overruns on these large, complex, multi-billion dollar programs could have cascading effects across NASA’s portfolio—including the potential to postpone or even cancel projects in earlier stages.

NASA is on our High Risk List due in part to problems managing the risks of its major projects. Although the agency has made progress in this area, such as by introducing tools to help project officials anticipate and monitor risks, the agency has struggled with implementing these tools.

Can’t get enough space science and facts? Check out the full report on NASA’s projects for photos, stats, and additional details, and listen to our podcast: