Have you ever nervously driven behind a car with a mattress loosely tied to its roof, or a pickup truck with the bed filled to overflowing? These unsecured loads can pose a serious hazard to other motorists, potentially leading to injuries, property damage, and fatalities. For example, in April 2012, a pedestrian in Florida was seriously injured after being hit by a mattress and metal frame that fell off a vehicle.

In 2010, the National Highway Traffic Safety Administration (NHTSA) estimated that there were about 440 fatalities caused by roadway debris. However, NHTSA’s estimate relies on police crash reports from each state to determine whether or not a crash was caused by an unsecured load, and not all state reports contain a field where officers can flag “unsecured loads” as a contributing factor. 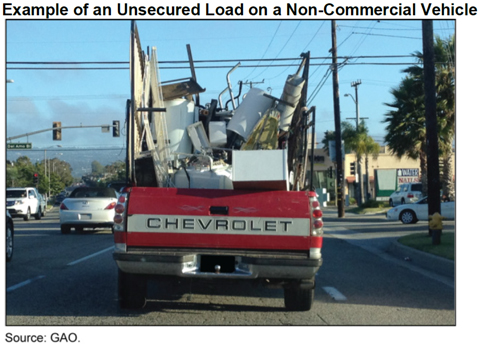 All 50 states and the District of Columbia have statutes imposing some level of fines or penalties for carrying unsecured loads, as shown below. Fines range from $10 to $5,000, and 15 states may impose jail time. 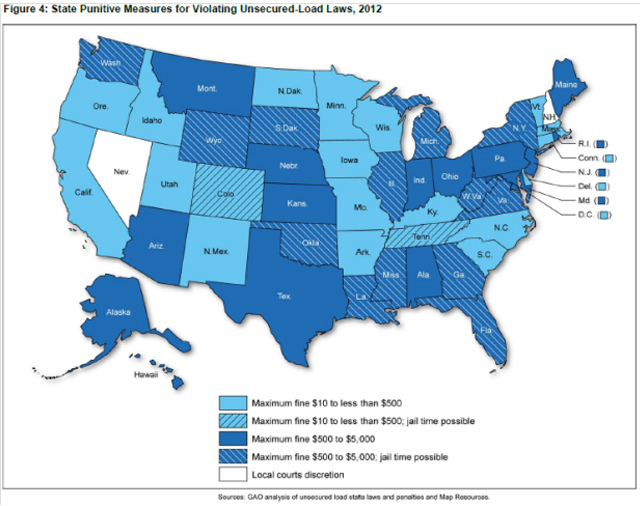 Law enforcement officials told us that educating drivers about the importance of properly securing the load in any vehicle or trailer before driving is the key component to reducing unsecured-load incidents. Ten states and the District of Columbia reported that they have a safety or education program related to unsecured loads.

Interested in more road safety issues? Check out our reviews of motorcycle and teen driver safety.