Veterans Affairs piloted the use of scribes in 11 of its medical centers from 2020-2022. Scribes assisted providers in the cardiology, orthopedic, and emergency departments—updating electronic health records in real-time during patient visits.

VA addressed 4 of 5 best practices for pilot design, such as creating a plan to evaluate it. But VA didn't look at how or whether the pilot could be expanded. We recommended VA do so. 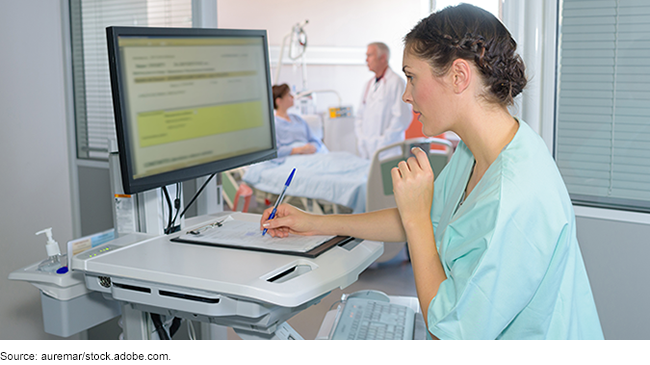 GAO found that VHA's design of the scribe pilot was generally consistent with four of the five leading practices for pilot design that GAO had previously identified. VHA (1) established objectives, (2) communicated with stakeholders, (3) developed an assessment methodology, and (4) developed a plan for evaluating the pilot. However, VHA's design did not include plans for a scalability assessment, the fifth leading practice for pilot design. A scalability assessment would examine whether or how the pilot's approach could be expanded for broader implementation across VA. This assessment should identify criteria or standards to inform decisions, such as measures to evaluate the costs and benefits of the pilot. VHA officials told GAO they designed the pilot according to the VA MISSION Act, which did not require a scalability assessment. Conducting such an assessment would help inform VHA's decisions about whether or how it might use scribes beyond the pilot.

VHA officials identified seven initial lessons learned during the implementation of the scribe pilot. Lessons included considering the use of virtual scribes and standardizing scribe onboarding training. VHA officials said they identified lessons from calls with their research partners and pilot participants—including contractors, scribes, providers, and local pilot coordinators—and from their firsthand experiences implementing the pilot. VHA officials told GAO they plan to review the pilot's final evaluations, which may lead to other potential lessons. After reviewing these evaluations, VHA officials told GAO they plan to make lessons available across VHA. Such lessons could help improve how VA medical centers use scribes outside the pilot and help inform an assessment of the scalability of the medical scribe pilot.

Medical scribes document patient health information in electronic health records during patient visits. By assisting providers, medical scribes may reduce providers' documentation burden and allow them to focus on their patients. However, VA researchers have found that limited information is available on provider productivity and patient satisfaction when using scribes. To assess the impact of using scribes on provider efficiency, among other things, the VA MISSION Act of 2018 directed VA to increase the use of medical scribes through a 2-year pilot.

The VA MISSION Act also included a provision for GAO to report on the pilot. This report (1) examines VHA's design of the pilot and (2) describes lessons learned that VHA identified from the pilot.

GAO reviewed VA and VHA pilot documentation and interviewed VHA officials, VA researchers, and contractors, as well as pilot coordinators from three VA medical centers that participated in the pilot. GAO selected the medical centers for geographic diversity and to include each specialty care area where VHA assigned scribes for the pilot.

GAO is making one recommendation, that VHA assess the scalability of the medical scribe pilot. VA concurred with GAO's recommendation and identified actions to address it.