The U.S. Patent and Trademark Office's Patent Trial and Appeal Board was formed in 2012 as an alternative to federal courts for patent disputes. There is the potential for political-appointee office directors to influence judicial decisions.

Our review of oversight at the board and the independence of its judges found, for example, that:

We made recommendations to increase transparency. 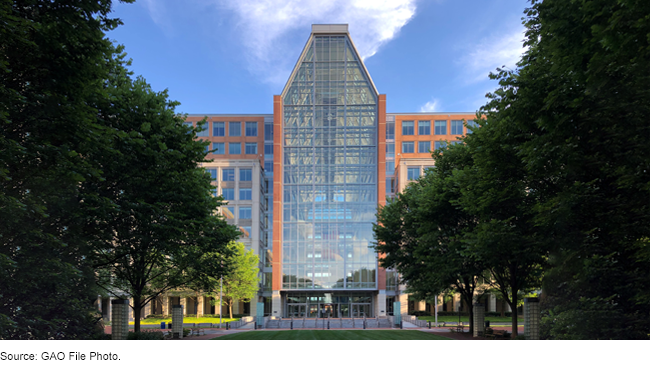 In a GAO survey of Patent Trial and Appeal Board (PTAB) judges conducted from January to February 2022, the majority of judges (75 percent) responded that oversight practiced by U.S. Patent and Trademark Office (USPTO) directors and PTAB management has affected their independence. Of those who reported working on America Invents Act (AIA) proceedings, the majority of judges (67 percent) GAO surveyed reported feeling pressure to change or modify an aspect of their decision in an AIA proceeding based on Management Review. On the other hand, some judges we interviewed stated that management did not get involved in most cases, and when they did they primarily focused on certain issues, such as eligibility for an AIA proceeding. Such involvement may have limited the number of AIA proceedings initiated. Some judges also noted it was not always clear who in management reviewed draft decisions and whether comments were mandatory.

In May 2022, PTAB implemented new interim oversight procedures, which made Management Review optional, and clarified that the USPTO Director would not be involved in decision-making prior to issuance. These changes could help alleviate judges' concerns, if finalized and clearly communicated in accordance with USPTO strategic plan goals and federal internal control standards.

Stakeholders GAO spoke with were generally unaware of the methods USPTO and PTAB management uses to oversee judges' decisions. Some former judges who currently represent parties before the PTAB suggested that outside stakeholders—including parties to the cases—would not likely know the extent to which directors or PTAB management had influenced or changed aspects of an AIA proceeding, particularly if it had been through Management Review. In addition, some judges noted that management guidance sometimes affected an aspect of their decision, but that was not always transparent to the public or parties to the case. According to one judge, insight into the differing views and legal reasoning on a case can help parties decide whether to appeal or to request Interim Director Review.

PTAB's May 2022 interim review procedures could improve transparency about its oversight practices if finalized and procedures are made publicly available, helping to meet USPTO's strategic goal of improving stakeholder engagement.

Since its creation in 2012 by the AIA, PTAB, an adjudicative body within the USPTO, has offered an alternative to the federal courts for settling certain patentability disputes. However, some participants in PTAB proceedings have raised concerns about whether PTAB management or the USPTO Director have used their oversight authority to influence judges' decision-making. The Supreme Court ruled in 2021 that the Director should have the ability to review judges' final decisions in certain proceedings.

This report examines, among other things, (1) PTAB judges' perspectives on PTAB oversight practices, including the effects on their deliberations and decisions, and (2) selected stakeholders' and judges' perspectives on the public transparency of PTAB proceedings. GAO conducted a survey of all non-management and lead PTAB judges and received 204 responses, for an 87 percent response rate. GAO also interviewed PTAB officials and stakeholders—including parties to PTAB proceedings, and current and former judges.

GAO is making four recommendations to USPTO to increase transparency—including specifying in finalized policies PTAB management and USPTO Director roles in internal oversight processes and circumstances in which judges are required to incorporate management comments. GAO is also recommending that PTAB take additional steps to improve stakeholder awareness of oversight practices. USPTO concurred with these recommendations and is planning or taking actions to implement them.