The nation's 16 critical infrastructure sectors rely on internet-connected devices and systems to deliver essential services, such as electricity and health care. These sectors face increasing cybersecurity threats—an issue on our High Risk list.

Federal agencies that have leadership roles in 3 sectors we reviewed have taken some steps to manage the cybersecurity risks posed by internet-connected devices and systems. But they've not assessed risks to the sectors as a whole. Without a holistic assessment, the agencies can't know what additional cybersecurity protections might be needed.

Our recommendations address this and more. 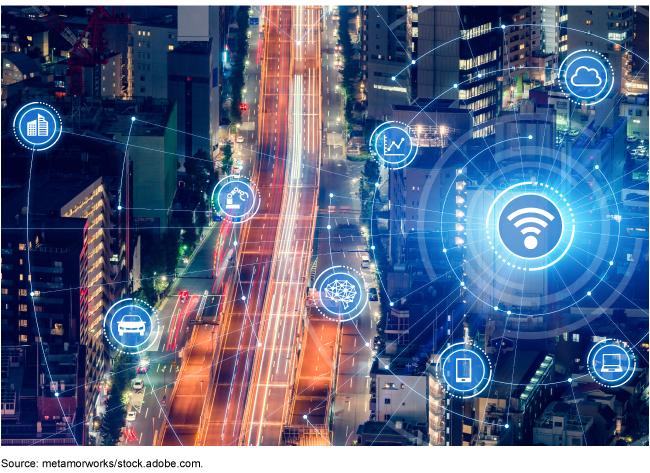 The nation's critical infrastructure sectors rely on electronic systems, including Internet of Things (IoT) and operational technology (OT) devices and systems. IoT generally refers to the technologies and devices that allow for the network connection and interaction of a wide array of “things,” throughout such places as buildings, transportation infrastructure, or homes. OT are programmable systems or devices that interact with the physical environment, such as building automation systems that control machines to regulate and monitor temperature.

Figure: Overview of Connected IT, Internet of Things (IoT), and Operational Technology 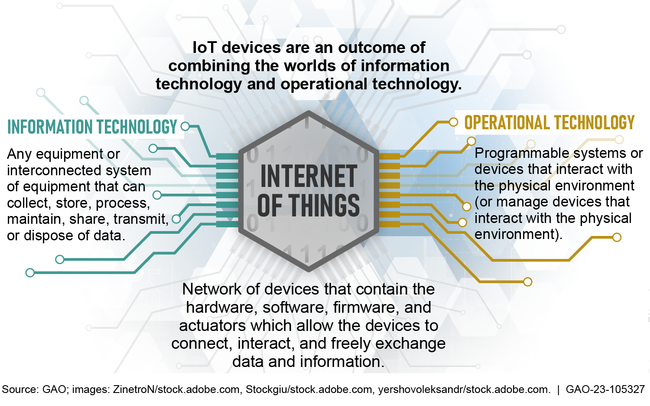 To help federal agencies and private entities manage the cybersecurity risks associated with IoT and OT, the Department of Homeland Security's Cybersecurity and Infrastructure Security Agency (CISA) and the National Institute of Standards and Technology (NIST) have issued guidance and provided resources. Specifically, CISA has published guidance, initiated programs, issued alerts and advisories on vulnerabilities affecting IoT and OT devices, and established working groups on OT. NIST has published several guidance documents on IoT and OT, maintained a center of cybersecurity excellence, and established numerous working groups. In addition, the Federal Acquisition Regulatory Council is considering updates to the Federal Acquisition Regulation to better manage IoT and OT cybersecurity risks.

Selected federal agencies with a lead role have reported various cybersecurity initiatives to help protect three critical infrastructure sectors with extensive use of IoT or OT devices and systems.

However, none of the selected lead agencies had developed metrics to assess the effectiveness of their efforts. Further, the agencies had not conducted IoT and OT cybersecurity risk assessments. Both of these activities are best practices. Lead agency officials noted difficulty assessing program effectiveness when relying on voluntary information from sector entities. Nevertheless, without attempts to measure effectiveness and assess risks of IoT and OT, the success of initiatives intended to mitigate risks is unknown.

The Internet of Things Cybersecurity Improvement Act of 2020 generally prohibits agencies from procuring or using an IoT device after December 4, 2022, if that device is considered non-compliant with NIST-developed standards. Pursuant to the act, in June 2021 NIST issued a draft guidance document that, among other things, provides information for agencies, companies and industry to receive reported vulnerabilities and for organizations to report found vulnerabilities. The act also requires the Office of Management and Budget (OMB) to establish a standardized process for federal agencies to waive the prohibition on procuring or using non-compliant IoT devices if waiver criteria detailed in the act are met.

As of November 22, 2022, OMB had not yet developed the mandated process for waiving the prohibition on procuring or using non-compliant IoT devices. OMB officials noted that the waiver process requires coordination and data gathering with other entities. According to OMB, it is targeting November 2022 for the release of guidance on the waiver process. Given the act's restrictions on agency use of non-compliant IoT devices beginning in December 2022, the lack of a uniform waiver process could result in a range of inconsistent actions across agencies.

To assess lead agency actions, GAO first identified the six critical infrastructure sectors considered to have the greatest risk of cyber compromise. From these six, GAO then selected for review three sectors that had extensive use of IoT and OT devices and systems. The three sectors were energy, healthcare and public health, and transportation systems. For each of these, GAO analyzed documentation, interviewed sector officials, and compared lead agency actions to federal requirements.

The Departments of Homeland Security and Transportation concurred with the recommendations while Energy said it would not respond to the recommendations until after further coordination with other agencies. Health and Human Services neither agreed nor disagreed with the recommendations but noted planned actions. Specifically, the department said it planned to update its sector-specific plan but asserted that it cannot compel adoption of the plan in the private sector. GAO recognizes the voluntary character of the relationship between the department and the critical infrastructure sector. However, establishing IoT and OT specific metrics will provide a basis for the department to establish accountability, document actual performance, promote effective management, and provide a feedback mechanism to inform decision-making.

OMB stated that the agency is targeting November 2022 for release of guidance on the waiver process. As of November 22, 2022, OMB had not yet issued this guidance.