Combined sewer systems collect sewage and storm runoff in the same pipes for treatment. This means heavy rainfall can overwhelm system capacity, causing raw sewage to overflow into waterways. About 700 U.S. municipalities have such systems.

In 1994, the Environmental Protection Agency told these municipalities to develop plans to address overflows and comply with the Clean Water Act. The 11 municipalities we reviewed faced challenges—such as getting funds for construction and maintenance—that may extend their timelines for fixing sewage overflows.

EPA hasn’t set goals for this, or tracked progress. Our recommendations address this, and more.

(This image was updated to correct the number of municipalities with combined sewer overflows in EPA Region 2.) 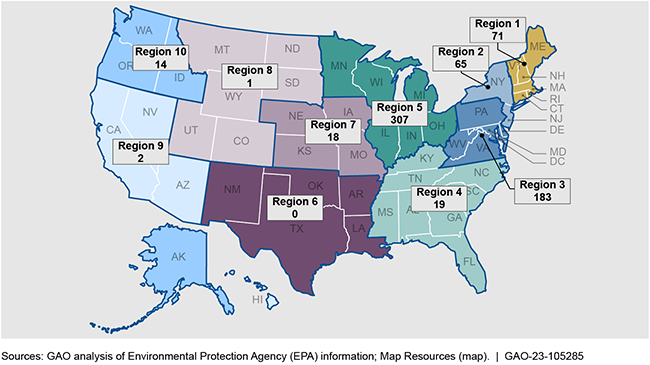 During heavy rainfall and other wet weather events, combined sewer systems are designed to overflow and discharge untreated wastewater mixed with raw sewage directly into a nearby water body. These discharges, known as combined sewer overflows (CSO), occur through system-designed outfalls (see fig.) and may impair water quality. The Environmental Protection Agency's (EPA) 1994 CSO Control Policy directs municipalities with CSOs, which number about 700, to develop long-term control plans to eliminate or reduce CSO discharges to achieve compliance with Clean Water Act requirements. These plans identify actions to be taken by municipalities to address CSOs and a schedule for achieving compliance with the Clean Water Act as soon as practicable. The policy provides that these plans should be included in an appropriate enforceable mechanism, such as a permit or judicial order.

Due to EPA's limited data, GAO reviewed a sample of 11 municipalities and found that they are at different points in implementing their long-term control plans or similar efforts. Specifically, two have completed their construction work or are near completion, and one is in litigation over whether it must update its plan. The other eight municipalities' plans are ongoing, with planned completion dates up to 2040. However, the municipalities face challenges in addressing CSOs, and some have extended their completion dates. For example, Morgantown, West Virginia, initially planned to complete its controls by 2020 but extended it to 2035, due to affordability concerns.

EPA's lack of consistent nationwide data prevents the agency from reporting on the status of municipalities' control plans or their effect on water quality. EPA collects some information on whether municipalities have a plan in place and details of individual control plans. For example, as of June 2022, according to EPA documents, most municipalities had a long-term plan and enforceable schedule in place. However, no further status information, such as the time to complete planned work, was available. According to EPA officials, the agency does not currently have performance goals and measures to track the implementation status of the control plans or water quality improvements. Without such goals and measures, EPA will be unable to assess or provide information on the CSO program and its effect on water quality.

Combined sewer systems collect wastewater—including domestic sewage and industrial wastewater—and stormwater runoff in the same sewer lines for treatment and discharge into a nearby water body About 700 municipalities across the U.S. have combined sewer systems. EPA directs municipalities with CSOs to develop plans to comply with requirements in the Clean Water Act, including water quality standards, which are established by states. In EPA's last estimate from 2004, 850 billion gallons of contaminated CSO discharges were released each year. Efforts to control discharges have likely reduced CSOs since then.

This report examines (1) EPA's policy to address CSO discharges, (2) the status of municipalities' long-term control plans and challenges they faced, and (3) how EPA tracks progress in implementing long-term control plans and improving water quality resulting from CSO controls. GAO analyzed law, policies, and guidance related to CSOs, as well as EPA reports; and interviewed EPA officials. To report on the implementation of EPA's CSO policy, GAO selected a nongeneralizable sample of 11 municipalities with CSOs based on geographic location and other factors.

GAO is making three recommendations, including that EPA set goals and measures to show progress toward implementation of long-term control plans and water quality improvement. EPA generally agreed with these recommendations.