In 2008, Congress required the Department of Justice to create and implement a national strategy to combat the exploitation of children. The strategy must be updated every 2 years, led by an appointed senior official, and include 19 specific elements, such as setting measurable goals.

But in the past 14 years, 9 detailees have rotated through the national coordinator position. DOJ has only issued a strategy twice, hasn't fully included 12 of 19 elements, and hasn't updated it since 2016 to address advances in technology, like encryption, that make it harder to catch online predators preying on children.

Our recommendation addresses this. 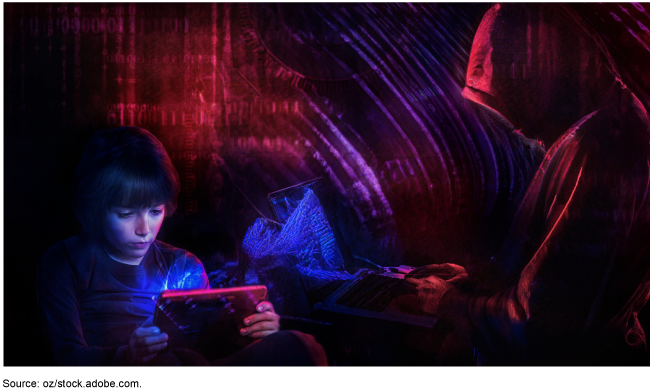 Reports of suspected child sexual exploitation increased 35 percent from 2020 to 2021, according to the National Center for Missing and Exploited Children. To address this alarming trend, federal agencies have efforts underway to combat online exploitation of children. These efforts include task forces, technology innovation, training, and public awareness campaigns.

Children Online are at Risk of Exploitation by Predators

The Congress passed the PROTECT Our Children Act of 2008 which, among other things, required the Attorney General to issue a National Strategy for Child Exploitation Prevention and Interdiction. The Act further required the strategy to be issued one year after enactment and updated every two years thereafter. However, as shown below, the Department of Justice (DOJ) has issued its strategy twice—in 2010 and 2016.

DOJ has not met a number of the requirements of the 2008 Act, due in part to it not making the strategy a priority. For example, although required by law, the department did not designate a senior management official to lead the strategy's development. Instead, DOJ rotated detailees through the position of national coordinator, and nine national coordinator detailees have held the position in the last 13 years. Further, the most recent 2016 strategy did not fully include 12 of the 19 required elements established in law, such as setting targets to accomplish quantifiable goals. Moreover, the strategy is not up-to-date on key technology advances that are making it more difficult to catch perpetrators. Addressing these issues is essential to providing assurance that an overall strategy is helping to guide the many efforts focused on protecting our children.

The volume, complexity, and danger of sexual exploitation of children online are increasing, and have been fueled by conditions created by the COVID-19 pandemic, according to DOJ. This creates additional challenges for federal agencies, in particular law enforcement. Addressing the issue is a formidable task amid a digital landscape characterized by increasing online access, advances in technology, and increased use of encryption.

GAO reviewed relevant federal laws, policies, and reports. GAO interviewed federal agency, nonprofit, and industry officials with roles in addressing the online exploitation of children. GAO also analyzed the 2016 National Strategy and compared it to the PROTECT Our Children Act of 2008.

GAO is recommending that the Attorney General ensure the department updates the National Strategy to fully address all statutory requirements, including appointment of a senior official, inclusion of all 19 statutory elements for the strategy, and issuance of the strategy every two years. DOJ neither agreed nor disagreed with the recommendation.