Federal real property management (including facility security) has been on our High Risk List since 2003. 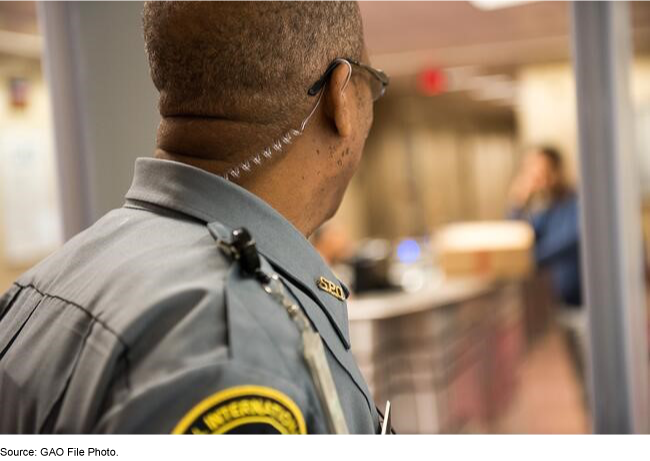 GAO reported in June 2021 that the Federal Protective Service's (FPS) stakeholders—tenant agency officials and building managers—held positive views about the content of FPS security assessment reports. In these reports, FPS made recommendations to address identified security vulnerabilities. Many of these stakeholders expressed concern that the cost estimates in the reports were not sufficiently detailed to inform their decisions on the recommendations.

GAO's ongoing work also suggests that FPS has increased law enforcement officer deployments since fiscal year 2020. FPS has deployed law enforcement officers to augment its protection of federal facilities during protests and has an agreement to help another agency within the Department of Homeland Security to provide security at its facilities in the Southwest border region. GAO's ongoing work also found that FPS continues to face staffing shortages. At the end of fiscal year 2021, FPS had not filled 21 percent of its positions, including about 200 law enforcement positions. FPS officials cautioned that as facilities return to pre-COVID operations, these shortages could affect FPS's ability to carry out its responsibilities.

Over one-million federal employees and visitors depend on FPS to provide security and protection at more than 9,000 facilities across the country. FPS assesses these facilities to identify security risks and then recommends security measures. In addition to this work, FPS provides law enforcement services on a short-term basis or in specific situations for individual agencies.

This testimony focuses on (1) stakeholders' views about FPS's facility assessments and the status of its security recommendations and (2) preliminary observations on FPS's law enforcement deployments. This statement is based on past work issued in June 2021 (GAO-21-464) as well as ongoing work on FPS's security recommendations and its move to DHS's Management Directorate in 2019.

For the 2021 report, GAO held discussion groups with stakeholders from 27 randomly selected FPS-protected facilities to obtain their views of FPS's risk assessments. In ongoing work, GAO analyzed FPS data on security recommendations made from fiscal years 2017 through 2021, data on law enforcement deployments in fiscal years 2020 and 2021, and staffing data for fiscal year 2021.

GAO previously recommended that FPS provide additional detail in its cost estimates for security measures. GAO is reviewing FPS's actions to address this recommendation. GAO will continue to assess these issues and make recommendations as appropriate.