Women continue to be underrepresented in management roles in the U.S. workforce, with a slight increase in 2019 compared to our 2010 report. Female managers continued to earn less than male managers, with the pay gap remaining unchanged.

Among other things, our analysis of Census Bureau data showed that in 2019: 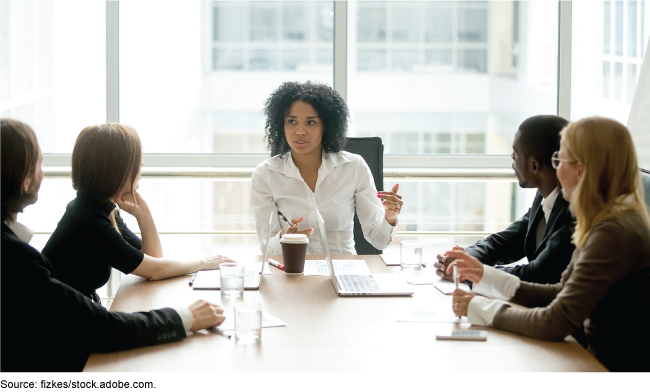 In 2019, women remained underrepresented in management positions in the U.S. workforce and continued to earn less than male managers, according to GAO's analysis of the U.S. Census Bureau's American Community Survey (ACS) data. Since GAO last reported on this topic in 2010, using data from 2007, the percentage of managers who are women has increased by about 2 percentage points, and the pay gap between female and male managers has not changed.

Women's representation in management. GAO estimated that in 2019, about 42 percent of managers were women, which was less than the percentage of women in non-management positions (about 48 percent). Female managers were more likely to be younger, more educated, and unmarried, and less likely to be White (non-Hispanic) than male managers.

Women's earnings. GAO estimated that in 2019, across all industries, full-time female managers earned 71 cents for every dollar earned by full-time male managers, on average. This pay gap for full-time female managers was greater than the pay gap for all women working full time (82 cents for every dollar earned by men, on average). Compared to the average salary for White (non-Hispanic) men, the pay gap was greater for Black (non-Hispanic) and Hispanic/Latina women than for White and Asian (non-Hispanic) women (see figure). The pay gap was also greater for managers age 40 and older than for younger managers.

Estimated Average Pay for Male and Female Full-time Managers by Race and Ethnicity, 2019

GAO's recent work has found considerable differences between women and men in certain sectors of the workforce, both in management positions and in pay, with potential long-term implications for women's financial security. For example, GAO found that in the financial services industry in 2018, 31 percent of managers were women, while 69 percent were men. Additionally, in a 2020 report, GAO found that the gender pay gap for federal workers has narrowed, but remains. In another 2020 report, GAO found that the gender pay gap affected women's total earnings and may also affect retirement savings for older women.

Women make up nearly half of the U.S. workforce, yet they face disparities in pay and challenges in advancing their careers. GAO's 2010 report on this topic, which used data from 2007, found that women were underrepresented in management positions and that female managers earned 71 cents for every dollar earned by male managers. GAO was asked to update its 2010 report.

GAO analyzed the Census Bureau's ACS data from 2019 (the most recent year reliable data were available at the time of GAO's review). GAO's analysis is descriptive in nature, and neither confirms nor refutes the presence of discriminatory practices. GAO did not control for any variables in its analysis, including variables that would be expected to affect pay and representation, such as hours worked beyond full time. Because the ACS is a sample survey, all results presented in this report are estimates. All differences in this report are statistically significant at the 95 percent confidence level, unless otherwise noted. GAO also reviewed its recent reports on women's representation and pay in various sectors of the workforce.

On Equal Pay Day, We Look at the Disparities in Earnings and Representation for Female Managers