Natural disasters in the U.S. have caused an average of almost $150 billion in damages per year over the past five years. These costs are likely to rise as the climate changes, creating a key source of federal fiscal exposure (see our High Risk List).

We testified that applying the 3 principles in our Disaster Resilience Framework—information, integration, and incentives—can help promote climate resilience. 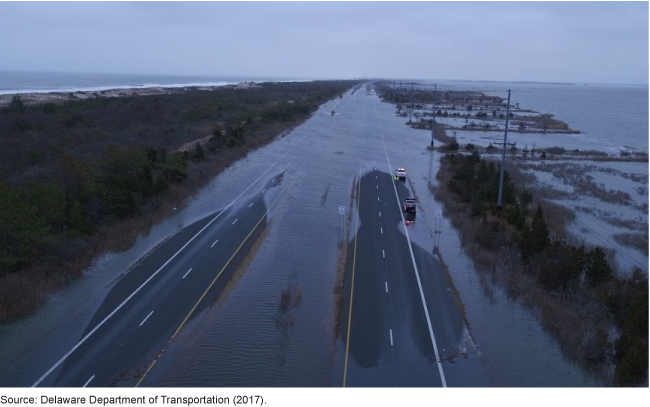 Disaster costs are projected to increase as certain extreme weather events become more frequent and intense due to climate change, as observed and projected by the U.S. Global Change Research Program and the National Academies of Sciences, Engineering, and Medicine. GAO's Disaster Resilience Framework can serve as a guide for analyzing federal action to facilitate and promote resilience to natural disasters and the effects of climate change. The framework is organized around three guiding principles—information, integration, and incentives (see figure)—that can help Congress and federal agencies improve federal climate resilience planning and implementation.

Integration. Congress and federal agencies can help decision makers integrate analysis and planning to take coherent and coordinated resilience actions. For example, in March 2021, GAO reported that the Department of Energy did not have a department-wide strategy to enhance the resilience of the electricity grid to the risks of climate change. GAO recommended that the department develop and implement such a strategy. The department agreed in principle with this recommendation, but its proposed actions do not fully address it.

Incentives. Congress and federal agencies can make risk-reduction investments more viable and attractive. For example, in September 2021, GAO identified a suite of policy options the Federal Highway Administration could take to incentivize states and localities to enhance the climate resilience of federally funded roads. GAO suggested that Congress direct the agency to implement one or more of these options, and to give it statutory authority to do so.

The increasing number of natural disasters in the U.S. and reliance on federal assistance to address them are sources of federal climate-related fiscal exposure. Limiting the Federal Government's Fiscal Exposure by Better Managing Climate Change Risks has been on GAO's High-Risk List since 2013, in part because of the increasing costs of federal disaster response and recovery efforts. For example, from fiscal years 2015 through 2021, select appropriations for disaster assistance totaled $315 billion.

Since 2003, GAO has made 84 recommendations and suggested six matters for congressional consideration related to enhancing climate resilience and limiting the federal government's fiscal exposure to climate change. As of March 2022, 31 recommendations are not yet implemented.