We testified about efforts to implement the Native American Graves Protection and Repatriation Act. The 1990 act governs cultural items, such as human remains and funerary objects, held by federal agencies and certain museums.

Agencies have made some progress implementing the law but tribes point to a need for more effective consultations, better protection of cultural items, and more. According to one report, in FYs 1990-2020, agencies repatriated 91.5% of the human remains affiliated with a present-day Indian tribe or Native Hawaiian group. However, it notes that there are more than 116,000 Native American human remains with no cultural affiliation. 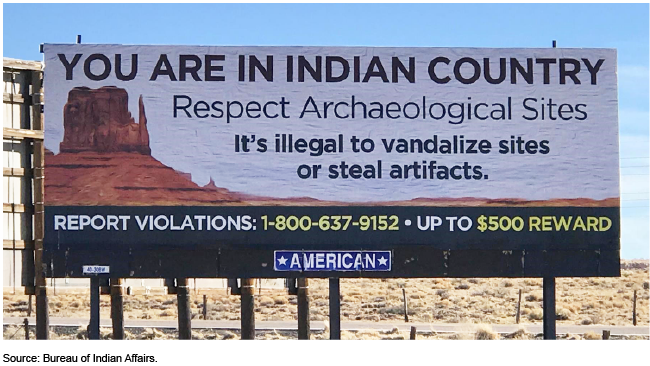 In 2010, GAO reported on implementation of the Native American Graves Protection and Repatriation Act (NAGPRA), which governs Native American cultural items, such as human remains, held by federal agencies and certain museums. GAO concluded that (1) federal agencies had not fully complied with all requirements; (2) the National NAGPRA Program had taken actions to implement the NAGPRA requirements but had not carried out all responsibilities; and (3) federal agencies had repatriated many items covered by NAGPRA, such as human remains, but had generally not tracked or reported on their efforts.

Federal agencies have implemented all of GAO's 2010 recommendations for improving the implementation of NAGPRA. As a result of addressing one recommendation, annual data on the status of federal agencies' repatriation efforts are readily available to Congress and the public. According to the National NAGPRA Program's fiscal year 2020 report, in fiscal years 1990 through 2020, agencies repatriated 91.5 percent of the human remains in their collections that were culturally affiliated with a present-day Indian tribe or Native Hawaiian organization. However, the report notes that more work is needed, especially to repatriate more than 116,000 Native American human remains still in collections, of which 95 percent have not been culturally affiliated.

Federal agencies have made progress in implementing NAGPRA, but tribes and tribal organizations indicate that several challenges remain including challenges with (1) consulting with tribes and tribal organizations, (2) better protecting Native American cultural items, and (3) addressing challenges in the limited scope of the law and enforcement. GAO has also identified such challenges and made a total of 41 recommendations in its 2018, 2019, and 2021 reports. For example, in March 2019, GAO recommended that federal agencies take steps to improve their tribal consultation process. As of January 2022, GAO had closed 13 of the 41 recommendations as implemented, and 28 remained open.

When NAGPRA was enacted in 1990, it was estimated that federal agencies and museums had tens of thousands of Native American human remains, funerary objects, and sacred objects in their possession. Such cultural items were added to collections through archeological excavations intended to advance scientific knowledge and preserve cultural items or through discoveries during federal construction projects. The items also have a long history of being stolen from federal and tribal lands and being added to private or institutional collections.

Among other things, NAGPRA requires federal agencies and museums to return certain Native American unassociated funerary objects, sacred objects, or objects of cultural patrimony unless the museum or federal agency can provide that it has a right of possession to the objects. The National NAGPRA Program, within the Department of the Interior's National Park Service, facilitates government-wide implementation of NAGPRA.

GAO made recommendations in prior reports to address NAGPRA implementation challenges. Agencies generally agreed but have not yet fully implemented all of them.