The Department of Energy must clean up the nuclear waste left behind at two former uranium enrichment sites. For example, it needs to convert DUF6 (a dangerous byproduct of the uranium enrichment process) into a more stable chemical form that can be disposed of or reused.

DOE estimates it could cost at least $7.2 billion to convert and dispose of the DUF6 at its sites. But if DOE can transfer portions of its DUF6 inventory—such as by selling some to a private company—it could save billions. However, it's unclear if DOE has authority to sell depleted uranium. 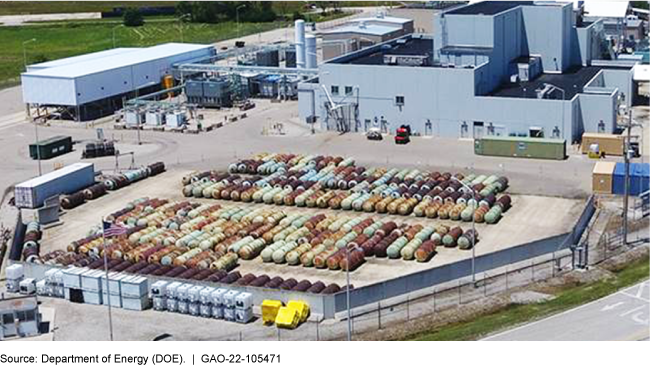 The Department of Energy's (DOE) Office of Environmental Management (EM) used the COVID-19 shutdown to perform maintenance and modifications at the two depleted uranium hexafluoride (DUF6) conversion facilities located at the Portsmouth and Paducah sites. These facilities convert DUF6 into two primary products: depleted uranium oxide and hydrofluoric acid. According to EM, the agency spent about $47.4 million on modifications that officials say will improve the facilities' efficiency. EM has not fully assessed the impact of this shutdown on the conversion mission, but officials said that they were developing new cost and schedule estimates for the facilities that will be finalized in 2022. Conversion operations restarted at the Paducah facility in November 2021, and EM officials told us operations restarted at the Portsmouth facility in July 2022.

EM has three agreements to reserve nearly 30,000 cylinders of DUF6 (about 44 percent of the inventory) for use by other entities. If the agreements are finalized, the agency may not need to convert all its DUF6 and could reduce operations of the conversion facilities by roughly 30 years, potentially saving over $2 billion in operations costs. EM has two agreements to transfer ownership of nearly 5,500 cylinders to the National Nuclear Security Administration for two separate programs, but the plans and timing of one agreement are uncertain. EM has also reserved over 24,000 cylinders to sell to a private company. However, DOE's authority to sell depleted uranium is doubtful, as it appears to be inconsistent with the 1996 legislation governing DOE uranium disposition. Clarifying DOE's authority to sell depleted uranium could help avoid litigation that could interrupt DOE's efforts to sell DUF6.

EM has identified options for disposing of depleted uranium oxide, but plans have not been finalized. EM has determined that three waste disposal sites may be suitable for the depleted uranium oxide but, as of March 2022, only one site is licensed to receive it. Officials said that the agency has been waiting for funding to begin the disposal process. In addition, EM has directed its contractor to sell hydrofluoric acid to a private company and apply the proceeds of those sales to contract costs. EM has been able to keep and use the proceeds of the hydrofluoric acid sales under appropriations laws enacted from fiscal years 2011 through 2022.

EM is responsible for cleaning up the nuclear waste left behind at two former federal uranium enrichment sites (Portsmouth, in Ohio, and Paducah, in Kentucky). One of the cleanup-related activities is the conversion of DUF6—a highly corrosive by-product of the uranium enrichment process that can be dangerous to human health and the environment—into depleted uranium oxide. This is a more stable chemical form of depleted uranium that can be disposed of or reused. The conversion facilities began operating at Portsmouth in 2010 and Paducah in 2011, but both facilities stopped conversion operations in March 2020 because of the COVID-19 pandemic.

Senate Report 117-39 accompanying S. 2792, a bill for the National Defense Authorization Act for Fiscal Year 2022, included a provision for GAO to review the two conversion facilities. This report examines (1) EM's response to the facilities' COVID-19 shutdown and effects on the facilities' cost and schedule estimates, (2) EM's agreements to provide DUF6 to other entities, and (3) EM's plans for depleted uranium oxide and hydrofluoric acid.

Congress should consider clarifying DOE's authority to sell depleted uranium, as well as any conditions connected to such sales. DOE did not comment on this report.