As of March 1, 2022, about 75% of these family members had reported to ICE as required. ICE conducted several operations to try to locate the rest.

Public Queue Outside of an ICE Field Office in Baltimore, September 9, 2021 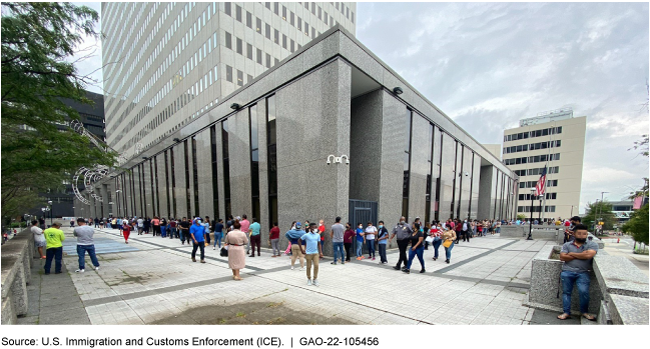 U.S. Border Patrol's implementation of the Notice to Report (NTR) process created challenges for U.S. Immigration and Customs Enforcement (ICE), which the agencies sought to address in developing the parole plus Alternatives to Detention (ATD) process. In March 2021, Border Patrol initiated the NTR process to reduce agents' administrative processing times by releasing noncitizen family units (parents and children under 18) without Notices to Appear. However, Border Patrol and ICE identified challenges with the NTR process. ICE officials stated they were concerned that family units were not reporting to field offices as required. Further, ICE had difficulty locating some of these individuals due to limited address information. Border Patrol released about 94,000 family unit members with an NTR before terminating this process in November 2021.

In July 2021, Border Patrol and ICE initiated a second process whereby agents release family units into the U.S. on humanitarian parole and enroll the heads of household in ICE's ATD program (or, parole plus ATD). ATD uses case management and electronic monitoring to help ensure noncitizens comply with their release conditions, allowing ICE to better track those released without a Notice to Appear. From July 2021 through February 2022, Border Patrol released about 91,000 family unit members under parole plus ATD.

ICE has efforts underway to initiate removal proceedings for family units that Border Patrol released with an NTR or under parole plus ATD. As of March 1, 2022, about three-quarters of family unit members (nearly 140,000) had reported to an ICE field office. To try to locate those who had not reported, ICE undertook several nationwide enforcement operations between November 2021 and June 2022. ICE officials stated family units that do not report, or that ICE does not locate, are to be referred for further enforcement action on a case-by-case basis to focus on the greatest threats to homeland security.

As of March 20, 2022, ICE issued Notices to Appear to about half of all family unit members (about 100,000) processed with an NTR or under parole plus ATD. According to ICE officials, ICE faces resource constraints processing those who report and issuing Notices to Appear. In July 2022, U.S. Customs and Border Protection and ICE issued a new policy under which they will share responsibility for initiating removal proceedings for those released without Notices to Appear.

To address these concerns and reduce time in custody, Border Patrol and ICE initiated two new processes in 2021, referred to as NTR and parole plus ATD. Border Patrol released family units into the U.S. without first issuing them a charging document—generally a Notice to Appear—which places them into immigration court removal proceedings. Instead, Border Patrol instructed them to report to an ICE field office. ICE officials are to further process family unit members who report to field offices, such as issuing them a Notice to Appear.