In 2017, the National Weather Service started an effort to reform the agency and better prepare the U.S. for extreme weather events. It has established 20 reform initiatives, such as automating weather balloon launches, to free staff for other duties and improve service to emergency managers and others.

We testified that the agency has largely followed leading reform practices, but it still has more to do. For example, it has designated positions to oversee the reforms, but it hasn't established a dedicated implementation team that can manage the reform process. The agency also faces staffing challenges that could impede its reform efforts. 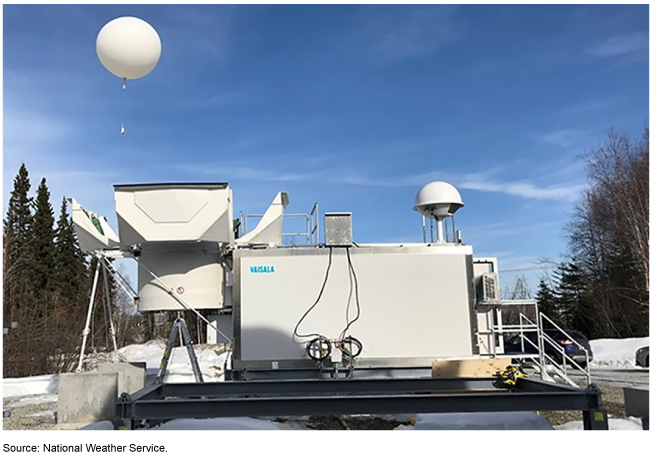 The Department of Commerce's National Weather Service (NWS) initiated the Evolve Program in 2017 to carry out a series of agency reforms to help achieve its strategic vision of strengthening the nation's readiness for and response to extreme weather events. The program has 20 reform initiatives, in varying stages of completeness, that are intended to free up staff time and improve service to the agency's partners (e.g., state emergency managers), among other things. In September 2021, GAO found that NWS has substantially followed five of the eight leading practices for effective agency reforms that GAO examined.

● Substantially followed —NWS took actions that addressed most or all aspects of the selected key questions GAO examined for the practice.

◒ Partially followed —NWS took actions that addressed some, but not most, aspects of the selected key questions GAO examined for the practice.

However, there are gaps in the extent to which the agency has followed the other three leading practices. For example, in the area of leadership focus and attention, NWS has designated three leadership positions as having primary responsibility for leading the implementation of the reforms under the Evolve Program. However, the agency has not established a dedicated implementation team with the capacity to manage the reform process. Instead, the agency has primarily relied on rotating leaders and part-time staff for the Evolve Program, an approach that has not provided adequate leadership continuity, staff continuity, or staff resources for the program. By revising its approach to staffing the Evolve Program and addressing the other gaps, as GAO recommended in September 2021, NWS would have better assurance its reform efforts will succeed.

The agency also faces staffing challenges that could affect its reform efforts. In its 2019 strategic human capital plan, NWS highlighted challenges related to staffing levels, vacancies, and hiring that could affect the agency's resources and capacity to implement its proposed reforms. These are long-standing issues that have been highlighted in previous studies, including a May 2017 GAO report. In September 2021, GAO found that these challenges continue. Continued attention to addressing these staffing challenges could help to reduce the risk that they will impede the agency's reform efforts.

Extreme weather events, such as tornadoes and hurricanes, can devastate communities across the United States. NWS plays a critical role in the nation's efforts to prepare for and respond to such events, including by developing weather forecasts and issuing warnings to help protect life and property. NWS has determined that it needs to reform its operations and workforce to effectively carry out its responsibilities and to improve its provision of services to emergency managers and other partners.

This testimony discusses (1) the extent to which NWS has followed selected leading practices for effective agency reforms and (2) staffing challenges NWS faces as it pursues its reform efforts. The testimony is based on a report GAO issued in September 2021, GAO-21-103792, on the agency's reform efforts, as well as previous GAO work on NWS from May 2017 and January 2020.

In a September 2021 report, GAO made three recommendations to NWS, including that the agency revise its approach to staffing the Evolve Program to improve leadership continuity, staff continuity, and the sufficiency of staff resources to effectively implement the agency's reform efforts. In responding to that report, the Department of Commerce agreed with GAO's recommendations.